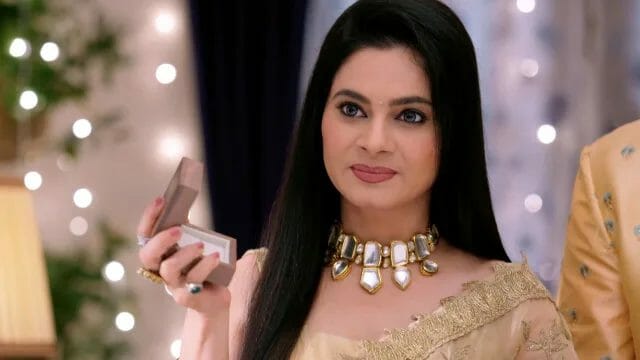 Rakhi will stop Anupama from telling Paritosh’s truth to Kinjal for Arya’s sake.

In today’s episode, Anupama asks Paritosh to tell the truth else she will beat him to the blue. Partiosh tries to explain. Anupama asks Paritosh to tell her why another girl is approaching him. She add even a murderer is given a chance to explain. Anupama says what wrong he did which Rakhi knows and she is clueless. Anuj think Anupama was little disturbed but left with Paritosh. He decides to check upon Anupama. Vanraj stops Anuj and asks him to take selfie with Arya.

Anupama asks Paritosh to open up. Pritosh tells to Anupama that since Kinjal was pregnant he needed a break thus met another girl. Anupama asks to Paritosh to keep talking. Pariotsh tells to Anupama about sleeping with the girl because Kinjal was going with pregnancy complications. Anupama recall Vanraj’s betrayal and stand stunned. She goes mad at Paritosh. Paritosh asks Anupama not to react as other girl is not his girlfriend. Anupama says to Paritosh that his action raised the question on her upbringing. She feels disgusted when Paritosh explained that he didn’t make a girlfriend but to get his desired fulfilled, he went out. Anupama regret giving birth to Paritosh.

In the upcoming episode, Rakhi will give Anupama Kinjal’s swear and will ask her to not disclose Paritosh’s truth. Anupama will be perplexed. Will Anupama be able to betray Kinjal by not telling her the truth? What will be Anupama’s decision? To know more keep watching the show mon-sat, 10 PM, Star Plus.

Follow this space for the latest update of your favorite TV show.