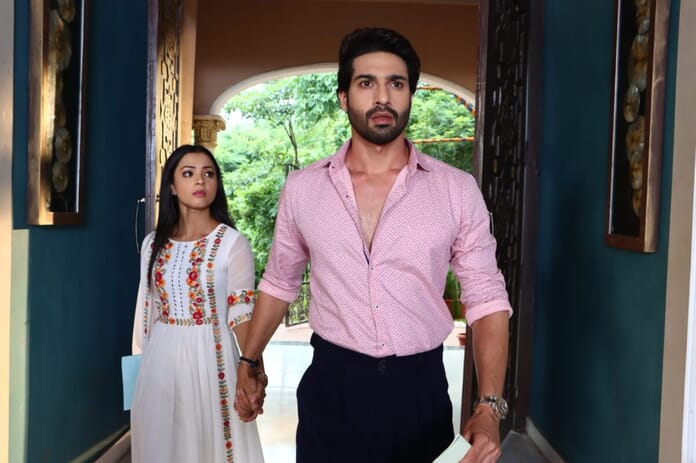 Aapke Nazron Ne Samjha, the show was and always is appreciated for it’s unique storyline. With Darsh and Nandini married, viewers expected many things but instead Darsh and Nandini got separated and Rawals now think that Nandini is dead. With Charmi bring brought by Rajvi as Nandini, viewers are excited and hoping to see the trith getting revealed soon. With so many tracks and twists left open in the show, it has successfully kept it’s viewers on the edge of their seats.

In the current track, Nandini gets worried for Vinni and tries to find her. Vini is actually shown kidnapped by Gunjan and Vanalata. Vinni keeps on talking by which Vanalata and Gunjan get upset and irritated. Here, Rajvi comes to Shobhit and accuses him to start a new sweet shop. She scolds Shobhit. Rajvi also apologies to Bansuri for making her lie. Bansuri is upset with what Rajvi did so she refuses to lie to Darsh anymore. Rajvi gets sad.
Here, Charmi finds a pic of Vini with her real mother and Darsh gets confused. Here, Shobhit receives the entry of Nandini for sweet making competition but he misses out on the name and tastes it.

He feels it has same taste as Nandini. Later, Bansuri talks to Naveen that she still blames Rawals for Nandini’s death. Naveen cares for Bansuri’s health so he calms her. Vanalata and Gunjan are irritated by Vini and they are clueless what to do next.

Darsh confronts Nandini that who is she if she is not the real mother of Vinni. Nandini imagines to say the truth but then comes back to reality. Darsh makes Nandini get arrested by Police and takes Vini with him. Rajvi takes care of Charmi seeing her sick. Charmi then reveals she is pregnant with Shobhit’s child.

Later, Nandini will ne wondering how she is always blamed. Here, Rajvi takes care of Vinni. In the temple, Nandini sees someone is sick so she goes to the lady to help her. Both of them do not see each other’s face but later Nandini sees it is Charmi and is shocked to see Darsh taking care of Charmi. She assumes that Darsh and Charmi are together.

Rajvi informs Darsh that Vini has high fever so Darsh leaves for Vini. Darsh gets furious to know Rajvi called Vini’s fake mom just because of she was asking for her. Nandini rushes to the Rawals. The gaurds don’t allow her inside. Darsh comes and taunts her. Rajvi goes to Vini and misses to see Nandini. Here, Bansuri sees Shobhit checking the entries for sweet making competition.

In the upcoming episodes, Nandini will be dragged inside Rawal mansion by Darsh. Rajvi will be shocked seeing Nandini.

Will Darsh know about the real Nandini? Will Shobhit be able to repent for his mistakes? What will Rajvi do next? What is in store for Nandini and Vinni?