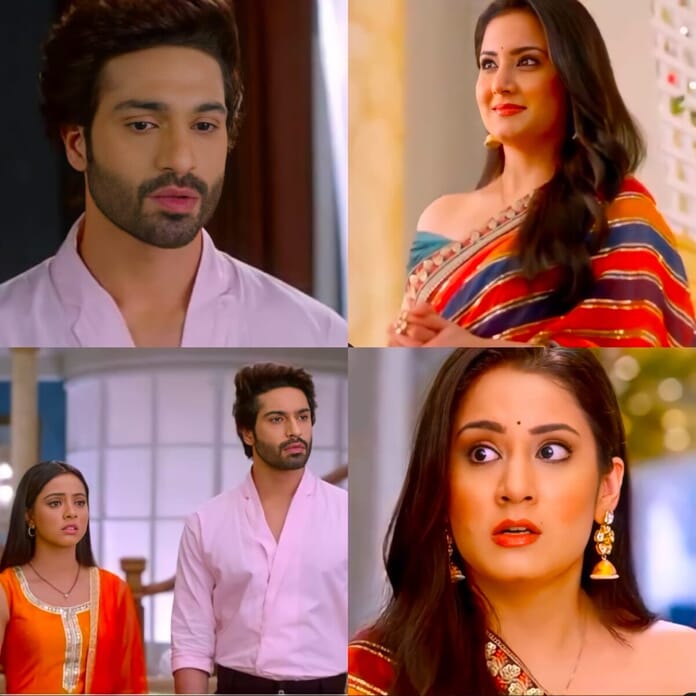 This week Nandini finds a hospital mark on Toral’s saree and gets a clue to get information about her. She notify it to Darsh and he tries to call all the hospital to find about Toral. Vipul hears him and gets worried. He lies to stop Darsh and says that he have already asked all the hospitals. He later apprises Rajvi about it, while she gets tensed.

Here, Charmi apologises to Darsh for her rude behaviour towards Nandini, while he ask her to be careful while talking with his wife. She then takes selfie with him and thinks about keeping it near her baby.

Nandini and Darsh spends some romantic time, while Charmi comes in between them and gives some work to Nandini to keep them away.

Elsewhere, Nandini finds out about Toral’s hospital and notify Darsha about it, while he gets suspicious on Vipul as he told him that he couldn’t find about Toral in any hospital. Meanwhile, Toral hears Rajvi talking about Puja and hurridly goes towards God’s idol to do the Puja. Everyone gets scared seeing her holding the aarti with fire upon it. Rajvi tries to stop it, while Darsh saves her from getting injured.

Darsh and Rajvi declares to send Toral back to the hospital. Later, the manager of the hospital comes to their home to take Toral. Nandini scolds him for his carelessness regarding their patients and ask to make her talk with family or relatives of Toral. He calls Vipul and states that he is inside Rawals house and notify him about the situation. Whereas, Vipul and Rajvi gets shocked hearing him and immediately cuts the call.

Ahead, Nandini gets suspicious and states that she won’t send Toral to the hospital until her family comes to meet her. The manager leaves, while Rajvi and Vipul comes there to see the situation, while Darsh notify them about Toral’s matter. Vipul tries to convince them to send Toral to any of the hospital, while Rajvi let her stay with them.

Toral sees a vessel and recognises it to be hers. Jhilmil tries to take it away, but latter hurts her. Rajvi also tries to make Toral understand but latter gets adamant. At that time Nandini comes there and takes her away.

Rajvi gets worried seeing Toral regaining her memory and shares it with Vipul, while Charmi hears their conversation and tells Mrs. Patel about it.

Darsh makes Nandini agree to send Toral to the hospital for her betterment, but Nandini gets sad as she sends Toral away. Later, she gets happy seeing Vini and Darsh’s bond. But, soon Toral comes back and the staff of hospital explained that she denies to stay without Nandini.

Further, Nandini notify Rajvi about the return of Toral while latter scolds her. Whereas, Charmi smirks thinking that Toral will keep Darsh and Nandini away from each other.

Toral cries seeing a baby’s tag and ask for her baby. Darsh and Shobhit consoles her. Meanwhile, Shobhit shares his problem with Darsh while latter consoles him. He then goes to talk to Charmi regarding Shobhit, while she fakes herself. She then ask him to teach her dandiya in order to suprise Shobhit, but internally thinks about spending time with Darsh.

Nandini tries to find about Toral’s baby and ask latter to remember something about her baby. Keshav sees her and gets worried. At that time Vipul also comes and tries to divert Toral’s mind. She forgets the baby’s name, while Nandini consoles her.

Rajvi plans to perform Shobhit and Charmi marriage hurridly to divert Nandini’s mind and Vipul informs latter about it. Everyone starts preparing for the marriage, while Charmi gets shocked learning about it. She gets determined to cancel the marriage. Meanwhile, Nandini still stays adamant to find out about Toral’s baby.

Here, Rajvi ask Toral to leave from her house and declares that she can’t return what she have taken from her. Nandini notices them and gets suspicious on Rajvi. She confronts her, while latter scolds them and ask to send Toral away.

Shobhit have a conversation with Darsh and shows his sympathy towards his brother. Meanwhile, Charmi calls Mrs. Patel to take her help to avoid the marriage. She gets an idea and decides to fake getting ill. She promises Mrs. Patel to help her in learning about Toral’s truth.

Rajvi gives jewelleries to Charmi for her wedding, while latter eats a pill to fake her illness. Elsewhere, Darsh suprises Nandini and both gets romantic but Shobhit ruins their moment stating about Charmi’s health. He gets worried while both Darsh and Nandini consoles him.

Darsh talks with the doctor, whereas Charmi smirks thinking her plan to be sucessful and she will get rid of the marriage. Meanwhile, Toral sees the jewelleries and proclaims it to be hers.

Nandini makes a antibiotic cream with the help of Naveen and applies it on Charmi. Meanwhile, Rajvi prays for Shobhit and Charmi’s marriage. At that time Toral comes and states that she remembered her name. Rajvi gets worried while Vipul tries to send her away. Toral mistakenly pours juice upon herself and forgets her full name, when Nandini asked her about it. Rajvi gets relaxed and ask Darsh to send Toral away as soon as possible as she is creating unnecessarily problems in their life.

Vipul thinks about telling the truth to Darsh but then changed his decision. But, Darsh somehow gets suspicious about Vipul. Nandini makes Toral ready and gives her jewelleries to her.

Ahead, Charmi gives Shobhit’s picture to a goon and ask him to end Shobhit’s life. She shows her gratitude towards Mrs. Patel for the idea and says that she will give information about Rawals to her, in order to ruin their image. Rajvi hears her conversation and gets shocked, while Charmi gets dumbstruck facing Rajvi.

Charmi executes her plan to get rid of Rajvi and decides to put blame on Toral. She tells about seeing Rajvi last with Toral to Vipul and Chetan. Meanwhile, Nandini convinces herself to send Toral to the hospital for her betterment. At that time she finds Toral’s name on the jewellery and concludes that she belongs to their family.

Everyone tries to find Rajvi and gets worried about it. Meanwhile, Nandini confronts Vipul about Toral’s name on the jewellery, but he lies and scolds her asking to find Rajvi. Charmi smirks seeing her plan getting sucessful and thinks that she got saved.

Elsewhere, Vini calls Parul as her second mother, making her happy. Meanwhile, she shows her gratitude towards Nandini for sharing Vini with them and says that they both will be her mother.

Nandini ask Parul about seeing Rajvi, to which latter denies. Whereas, Nandini gets worried thinking about Rajvi’s missing.

Now in the upcoming episode, Nandini will get confuse seeing Darsh’s photo in Charmi’s room. Later, she will see Charmi hugging Darsh and will get shocked thinking that if she loves Darsh? Lot more drama and twists to come in “Aapki Nazron Ne Samjha,” don’t miss watching the show.