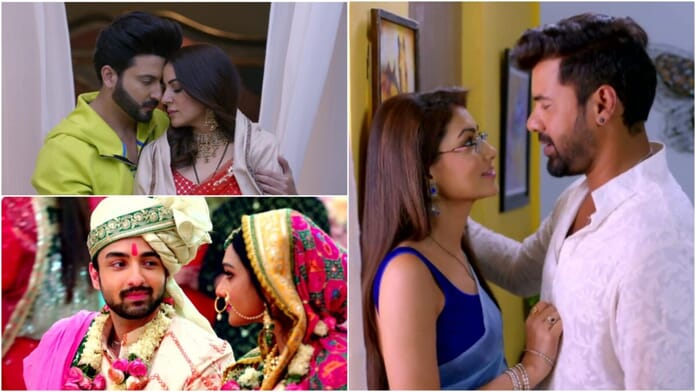 Ekta Kapoor ‘Bhagyas’ are ruling the Television today. Right from ‘Kumkum Bhagya’, ‘Kundali Bhagya’ to newly launched ‘Bhagya Lakshmi’; all the three zee TV shows are making good TRP on and off-line both. Alongside, storyline fans are not failing to hype their favorite ‘Bhagya’ couple. ‘PreeNan’, ‘AbhiGya’ and ‘RishMi’ are getting love from the fans. Three of them keep trending online for some or the other reason. Tell us which ‘Bhagya’ couple has your heart?

Abhi and Pragya entertaining the masses from past 7 years. Kumkum Bhagya still makes the TRP because the couple never fail to sizzle the screen with their performance. The chemistry of ‘AbhiGya’ is adorable. Sriti and Shabbir with their antics makes ‘ABHIGYA’ more cute and entertaining. Fans just can’t miss a chance to make their edits and gifs.

In the show currently, Abhi and Pragya again married each other. This contract marriage track in the show is bringing much entertainment home. Kumkum Bhagya fans are enjoying the current track.

Kundali Bhagya couple in the recent past trended by their fans as they feel that makers are wasting their chemistry in the show by showing worthless drama. Fans feel Preeta and Karan has a potential to heat the screen if their chemistry is used properly. But makers for the sake of drama ruining this beautiful couple.

Well, there is no doubt that Preeta and Karan romantic scene freezes the screen. Their passionate scenes are droolworthy. As Preeta and Karan actor Shraddha Arya and Dheeraj Dhopar are hot choice. Both share good rapport off-screen and the comfort in their scenes is visible.

In the show currently, Preeta learns she can’t get pregnant. Now PreeRan are deciding to adopt a child. This new development in the storyline is gripping the attention of the loyal viewers of the show.

Ekta Kapoor recently launched a new show Bhagya Lakshmi which is a struggle story of ‘Lakshmi’. Fans are liking the storyline. But most of them are fan of RishMi aka Rishi and Lakshmi chemistry. Rohit Suchanti and Aishwarya Khare is grabbing the eyeballs with their performance. Under the hastag RishMi fans celebrate the couple online.

As per the current track of the show, Lakshmi and Rishi get hitched. Lakshmi’s struggle at Oberio house is engaging show viewers. Former will also learn about Rishi’s true nature.