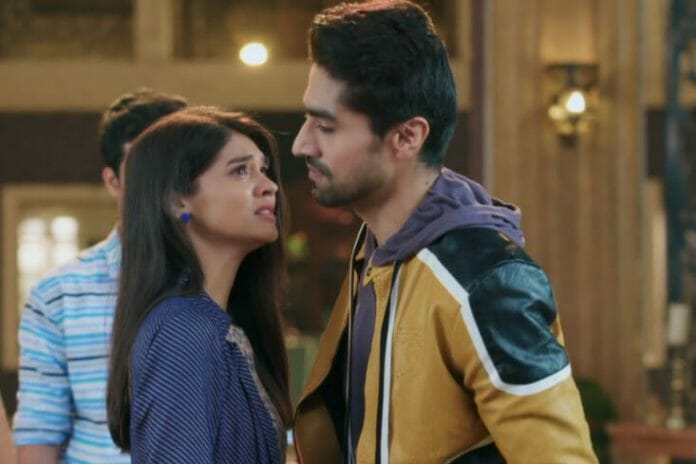 Drama will galore in Yeh Rishta Kya Kehlata Hai next week when Suhasini will expose Akshara’s sacrifice to Abhimanyu.

Before that check out  the highlight of this week:

This week started with Akshara rescuing Kairav and dropping him at Goneka house. She races against the time to fetch the evidence in Kairav’s favor. Mahima takes a promise from Abhimanyu to support her if Akshara fails to reach on time. Manjiri suffers a heart attack and slips into coma.

Akshara fetches the evidence and place it in Abhimanyu’s room. Abhimanyu fails to see the proofs. He misunderstands Akshara and takes media to Goenka house. Abhimanyu put Kairav behind the bars. Mahima and Parth temper the evidence. Akshara accuses Abhimanyu for not trusting her.

Towards the end of the week; Akshara says inspector didn’t let her meet Manish and Kairav. She decides to do something as soon as possible. Akhliesh deals with other businessmen post they refuse to believe Manish is not a culprit. They give a chance to Akhliesh and leave. Akhliesh breaks down. Akshara asks Akhliesh to stay strong and together they will come out from this phase. Swarna and Suhasini give their support to Akshara. They accuse Abhimanyu for the mess.

Abhimanyu sees Manish’s footage of getting arrested. He says to Manjiri that he didn’t got Manish arrested. Abhimanyu says Goenkas might be shattered. He wishes to be with them. Neil talks with Shefali and says if Akshara would have learned about Manjiri than she would have come to help her. Shefali says but Akshara is clueless. Neil says they need to inform Akshara so that Abhimanyu don’t get angry. He looks for a way to inform Akshara about Manjiri’s health.

Akhliesh along with Akshara meet lawyer to get a bail for Kairav and Manish. Lawyer tells to Akhilesh that their case is weak. Akshara learns about Manjiri’s health. She decides to visit Manjiri. Abhimanyu decide to meet Manish. Manish gives 2 mins to Abhimanyu. Abhimanyu says to Manish, Kairav is a culprit and only he will be punished. Manish says to Abhimanyu he can’t take a favour from him. Abhimanyu says he isn’t doing any favour. Manish accuse Abhimanyu for destroying his family. He asks Abhimanyu to leave.

Harsh and Anand decide to grow Birla hospital. Abhimanyu comes back. Akshara comes too Birla house too. Abhimanyu asks Neil to ask Akshara to leave. Akshara confront Abhimanyu about saying he hate her voice. She says if he has started to speak without thinking than he should develop a habit of listening too. Akshara says to Abhimanyu that to satisfy his ego he blabbers anything. She adds despite Kairav and Anisha they too have their personal relationship but he never contributed to it. Akshara calls Abhimanyu self-centred.

In the future episode, Abhimanyu will feel guilty about not trusting Akshara. Will Akshara forgives Abhimanyu.  Stay tuned to know more.