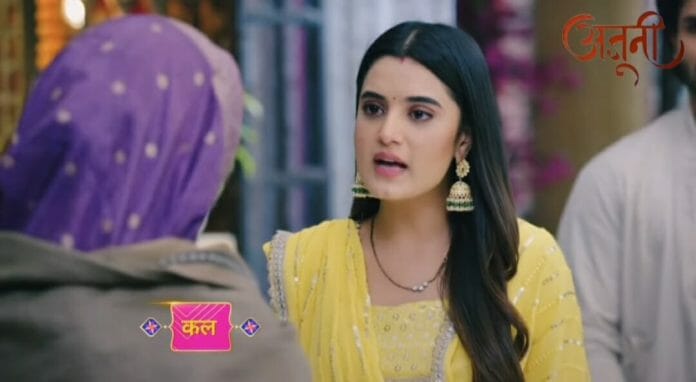 Shoaib Ibrahim and Ayushi Khurana starrer Ajooni is Star Bharat show. This show is about how, despite coming from a middle-class family with strong family values, Ajooni is compelled to marry the guy she despises the most. Now, Harsh gets a job in Bagga’s factory so it will be intresting to watch that what going to happen in the future episodes.

Ravinder asks Bebe to find the necklace before he returns and he leaves the house. Shikha tells Bebe that they did not search in Neeru’s bag yet. Ajooni opposes that. Bebe says that Ajooni should not oppose if she is innocent then. Neeru tell her that they can search because she did nothing wrong.

Harman finds the necklace in Neeru’s bag which shocks everyone. Bebe slaps Ajooni. Neeru and Ajooni defends themselves. Bebe applies color on their face on Shikha’s idea. Dolly records everything.

Shikha tells her plan to her mother. Someone leaves from there. Later, Ajooni tells everything to her family. Beeji consoles Neeru.

In the upcoming episode, Rajveer will ask Aman about Ajooni. Bebe will tell him that Ajooni run away from the house. Ajooni will tell her that she will make sure that the latter realises her mistake and wash Neeru’s feet with milk.

Will Ajooni be able to prove her and Neeru’s innocence? What Ajooni will do now?