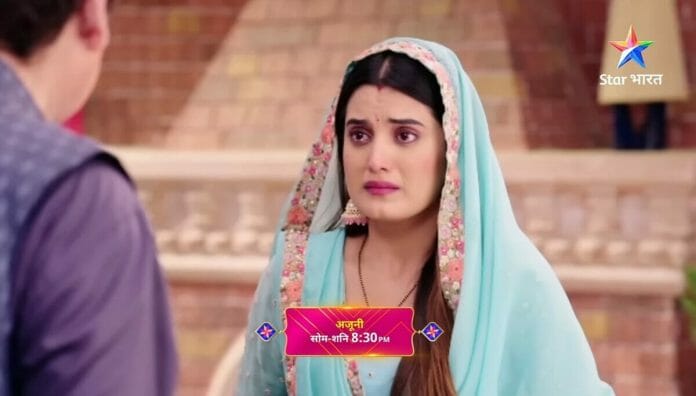 Shoaib Ibrahim and Ayushi Khurana starrer Ajooni is Star Bharat show. This show is about how, despite coming from a middle-class family with strong family values, Ajooni is compelled to marry the guy she despises the most. Now, Harvinder returns alive so it will be intresting to watch that what going to happen in the future episodes.

In the current track, Rajveer reveals that Shikha had called Karuna. Ravinder refuses to believe him and taunts him for suspecting everyone except Ajooni. He gives one gun to him and he points another gun to Ajooni. He asks him to choose between his father and his wife. Rajveer tells him that he love both. He says that he will kill himself.

Bebe asks Ravinder to stop all this. Police brings Harvinder there. Police inspector says that there is a village near the cliff and villagers found Harvinder and admitted him in the hospital. He reveals that Harvinder lost his memory in the accident.

He says that they can’t find the culprit until Harvinder regains his memory. Baggas takes Harvinder inside and asks him to recognize them. Harvinder remains silent. Mangi Ram and Rajveer tells Ravinder that Shikha’s family is behind all the problems.

What will happen to Ravinder and Bebe? Did Harvinder really lost his memory?