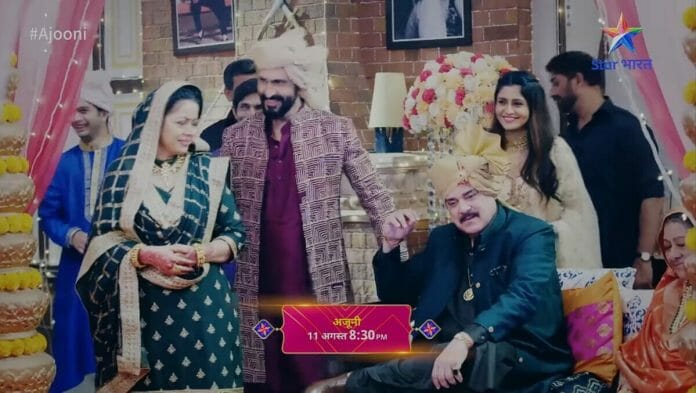 Now, Bebe tries to change Ajooni’s name after marriage but Ajooni refuses to change her name so it will be intriguing to watch that what going to happen in the future episodes.

Bebe comes there and asks Rajveer to go inside. Ravinder tells Bebe that Ajooni can’t become his daughter in law. Bebe tells him that she also don’t like Ajooni and she will teach a lesson to Ajooni after marriage.

Subhash asks Rajveer that what’s all this. Rajveer assures him that marriage will happen. Bebe brings Ravinder there. She asks Rajveer to complete the marriage rituals. Rajveer takes her and Ravinder’s blessings.

Rajveer says that Ajooni is his responsibility from now on. He asks Meher to visit his house whenever she want to meet Ajooni. After some time, Bebe says that they should change Ajooni’s name.

Ravinder says that he wants Ajooni to participate in the upcoming Sarpanch election so Damini name would suit her. Rajveer’s family discuss about Ajooni’s new name. Rajveer says that he already choosed a name for Ajooni. Ajooni says that she won’t change her name.

In the upcoming episode, Ajooni will tell Beeji that she married Rajveer to take revenge. Later, Ajooni will warn Rajveer’s family. Bebe will try to slap Ajooni. But Rajveer will stop Bebe.

How Bebe will react now? Will Rajveer support Ajooni?