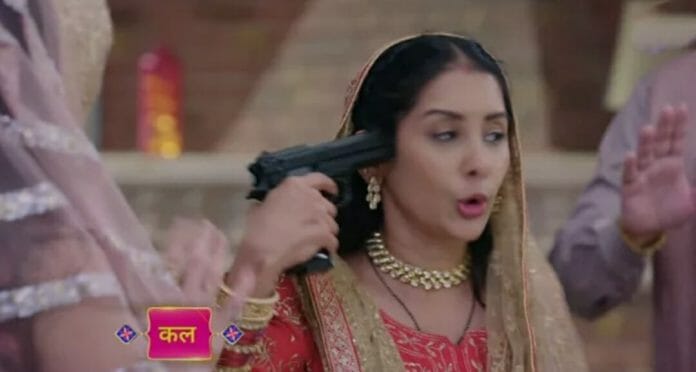 Shoaib Ibrahim and Ayushi Khurana starrer Ajooni is Star Bharat show. This show is about how, despite coming from a middle-class family with strong family values, Ajooni is compelled to marry the guy she despises the most. Now, Durga supports Ajooni in front of Baggas so it will be intresting to watch that what going to happen in the future episodes.

In the current track, Shikha accuses Ajooni. Bebe believes Shikha and she slaps Ajooni. She cancel’s Ajooni’s baby shower ritual as punishment. Neeru tries to perform the ritual but Bebe stops the former and warns her to not go against her.

Bebe tells Ajooni’s family to take Ajooni with them if they feel sad for her then. Ajooni decides to leave but Beeji stops the former. Durga comes there and performs Ajooni’s baby shower ritual. Neeru and Harman also performs the ritual.

Durga stops Shikha’s baby shower ritual saying that Shikha is not legally Harvinder’s wife. Guests agrees with her and leaves from there. Shikha thinks to kill Durga in anger. Her mother tells her to calm down. Later, Durga asks Baggas that why Shikha is staying there when her marriage with Harvinder is illegal.

District Collector Mr. Awasthi comes there to meet Durga. Durga tells him that she want to build school in her village. She requests him to pass the order as soon as possible. He nods at her. Ravinder tells Aman to bring milk for Mr. Awasthi. Shikha plans to mix bhaang in the milk.

In the upcoming episode, Aman will say that Harvinder don’t want her so she will kill herself. Everyone will get shocked hearing bullet firing sound.

What happened to Aman? Did Shikha mixed bhaang in the milk?