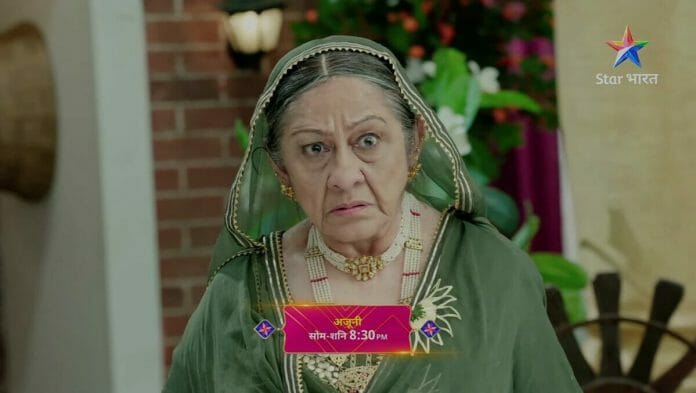 Shoaib Ibrahim and Ayushi Khurana starrer Ajooni is Star Bharat show. This show is about how, despite coming from a middle-class family with strong family values, Ajooni is compelled to marry the guy she despises the most. Now, Ajooni stays away from Rajveer for his sake so it will be intriguing to watch that what going to happen in the future episodes.

In the current track, Dolly cries saying that not even her parents worries about her. She informs Harvinder’s plan to Harman. Harman thinks that Harvinder changed the arrow. Harvinder tells Shikha that what happened in arrow matter. Shikha gives alcohol to him and tells him that she will be with him always.

She hugs him and signals at her mother. Rajveer learns about Ajooni’s fever. He gives her medicine but she refuses to eat it to avoid drinking water. She scolds him unnecessarily. He leaves the room. Harman tells Aman to give water to Ajooni after an hour.

Rajveer wonders that why Ajooni yelled at him unnecessarily. Dolly tells him that Ajooni don’t love him. She is about to tell him about Guru Maharaj’s words but Harman stops the former. Aman gives water to Ajooni. She praises her determination. Ajooni tells her that she is feeling bad that she yelled at Rajveer.

Rajveer hears that. He tells her that he can tolerate her anger for her. Later, Bebe praises Rajveer. Harvinder tries to break Rajveer’s head with alcohol bottle. But Bebe stops him and slaps him.

Will Ajooni tell the truth to Rajveer? What Harvinder will do now?