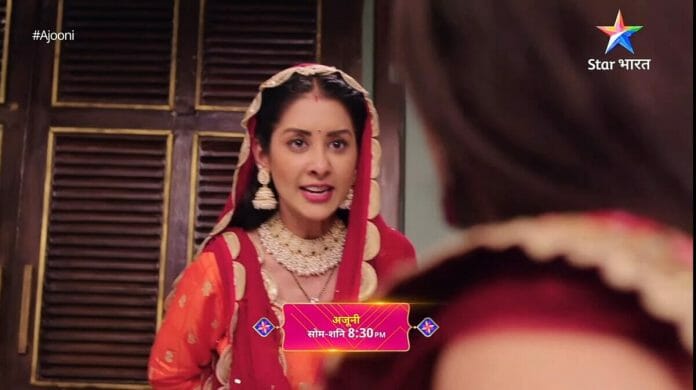 Shoaib Ibrahim and Ayushi Khurana starrer Ajooni is Star Bharat show. This show is about how, despite coming from a middle-class family with strong family values, Ajooni is compelled to marry the guy she despises the most. Now, Shikha is staying in Bagga house so it will be intresting to watch that what going to happen in the future episodes.

She orders Aman to take care of Shikha. Aman gives lemonade to Shikha. But Shikha taunts her. She says that she will rule Bagga house because she is pregnant with Harvinder’s child. Rajveer and Ajooni thinks Shikha is lying. Later, Aman enters Shikha’s room and tries to stab Shikha.

She asks her that if the latter is pregnant with Harvinder’s child. Ajooni learns that what Daimaa said and knife is missing from the kitchen. She runs to Shikha’s room and knocks the door. Everyone comes there hearing noise. Rajveer breaks the door. They holds Aman.

Who called Karuna? What will happen to Bebe?