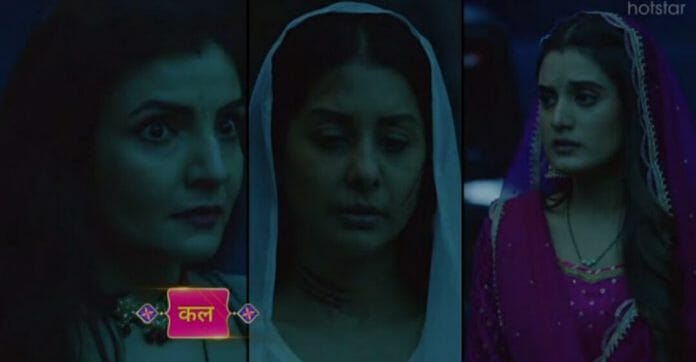 Shoaib Ibrahim and Ayushi Khurana starrer Ajooni is Star Bharat show. This show is about how, despite coming from a middle-class family with strong family values, Ajooni is compelled to marry the guy she despises the most. Now, Rajveer reveals everything to Ravinder so it will be intresting to watch that what going to happen in the future episodes.

In the current track, Harsh calls Shikha and tells her that Baggas won’t accept her again. Shikha yells at him. Aman and Meher wears same design outfit. They scares Harvinder. Aman tells Harvinder that she came to take him with her because she love him. He apologizes to her. She tells him that no use of that now.

Later, Harsh tries to kill Shikha and it turns out to be her dream. She gets shocked seeing Harvinder sitting there. Harvinder asks her about Harsh and she makes an excuse. He tells her that he saw Aman’s spirit but Harman saw Aman with Meher in the market.

They reaches the forest and finds Aman’s jewels and clothe. Shikha tells Harvinder that animals had ate Aman already. Aman appears before them as spirit.

In the upcoming episode, Harvinder will accept his mistakes and he apologize to Aman. Shikha and Harvinder will run from there to save themselves from Aman.

Ravinder will see Aman and ask Rajveer that what is all this. Rajveer will tell him that he called him there to reveal everything. He will inform him that Harvinder and Shikha left Aman in the forest so animals could eat her.

Will Ravinder believe Rajveer? Do Ajooni and Rajveer have proof against Harvinder and Shikha? Will Aman forgive Harvinder?