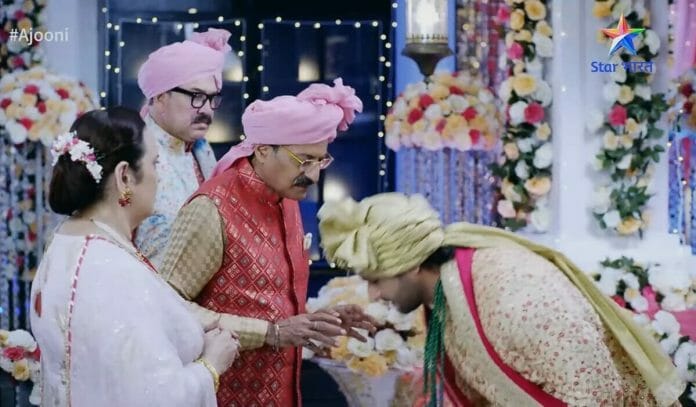 Now, Ajooni reaches Rajveer’s house to marry Rajveer so it will be intriguing to watch that what going to happen in the future episodes.

In the current track, Kamal notices Subhash crying. He asks him to handle himself. Subhash tells him that he can’t do anything for Ajooni. Kamal tells him that they can’t change the destiny. Ravinder’s PA tells Ravinder and Bebe that Ajooni belongs to middle class family.

He adds that he feels they trap Rajveer for money. Rajveer points gun at Ravinder. Ravinder mockingly says that he was waiting to see this day only. Rajveer threatens to shoot himself. Ravinder accepts for Rajveer’s marriage with Ajooni.

He says that Rajveer disappointed him today. Bebe slaps Rajveer for scaring her. He takes her blessings and leaves from there. Beeji gives the family photo to Ajooni. Neeru and Meher packs Ajooni’s luggage. Bebe asks Ravinder about marriage preparations.

He says that he can’t face anyone if Rajveer married Ajooni then. PA says that everyone will praise them because they are bringing daughter in law from middle class family. Ravinder slaps him. Bebe says that PA is right.

She says that they can make Ajooni participate in the election but the latter will rule. Later, Ajooni and her family reaches Rajveer’s house. Bebe scolds Ajooni for not wearing pallu.

In the upcoming episode, Ajooni will refuse to put varmala on Rajveer. She will ask him to fulfil her condition first. Rajveer will apologize to Subhash. He will tell Ajooni that he can do anything for her.

How Rajveer’s family will react now? Will Subhash forgive Rajveer?