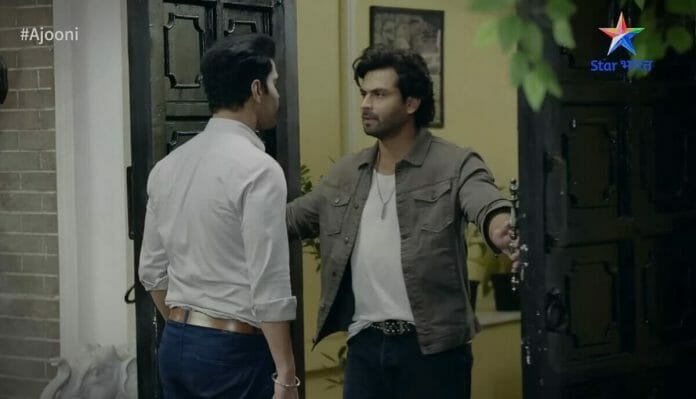 Shoaib Ibrahim and Ayushi Khurana starrer Ajooni is Star Bharat show. This show is about how, despite coming from a middle-class family with strong family values, Ajooni is compelled to marry the guy she despises the most. Now, Avinash reaches Bagga house to treat Aman so it will be intriguing to watch that what going to happen in the future episodes.

In the current track, Harvinder tells Aman to leave the room, saying that he has to talk to Shikha there. Ajooni asks Shikha to wait outside. She scolds Harvinder. Shikha provokes Harvinder against Ajooni. Ajooni scolds her for coming in between husband and wife. Shikha asks her that why Aman need to live when she can’t keep her husband happy. She says that no one cares about it even if Aman dies.

Ajooni slaps her. Shikha’s family and Baggas gathers in the hall. Shikha says that she want to slap Ajooni as punishment. Ravinder tells her that she is still an outsider. He asks Rajveer to punish Ajooni. Rajveer asks Shikha’s father that if the latter knows why Ajooni slapped Shikha.

He reveals the whole matter. Shikha’s father apologizes to Ravinder on behalf of Shikha. Shikha glares Ajooni and leaves from there. Ajooni asks Rajveer that why he is not taking stand for Aman. Rajveer tells her that she is his responsibility and he can do anything for her. He says that he can’t react the way he wants in Aman’s matter. Dolly mixes something in Meher’s kajal.

Meher applies kajal and screams. Bharat takes her to washroom. Neelam checks the kajal box and she understands that Dolly is behind that. Aman screams in pain. Rajveer goes to bring the Doctor. Avinash visits Bagga house to check Aman. He gets shocked seeing Ajooni there.

In the upcoming episode, Rajveer will beat Avinash up. Ajooni will ask him to not do that.

Will Rajveer listen Ajooni? Will Baggas learn about Avinash?