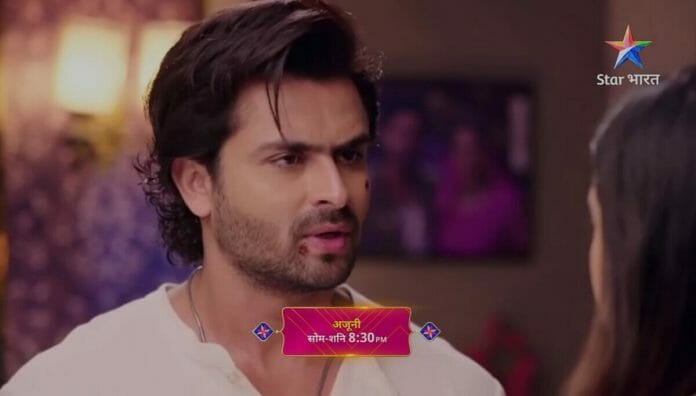 Shoaib Ibrahim and Ayushi Khurana starrer Ajooni is Star Bharat show. This show is about how, despite coming from a middle-class family with strong family values, Ajooni is compelled to marry the guy she despises the most. Now, Ravinder decides to kill Ajooni so it will be intresting to watch that what going to happen in the future episodes.

In the current track, Ravinder tries to prove that domestic violence don’t happen in Bagga house. Karuna tells him that they witnessed everything already. She asks him and Harman to apologise to their daughter in laws. Ravinder and Harman apologies to Aman and Ajooni. Karuna warns them to not repeat the mistake and leaves from there with media reporters.

Ravinder tries to break Ajooni’s hand but Rajveer saves Ajooni. He goes to meet Sethi. Sethi taunts Ravinder and says that higher officials will take decision. Rajveer misunderstands that Ajooni had called Karuna. Ajooni tells her that she did not call Karuna. Aman tells Rajveer that Ajooni was with her so Ajooni did not call anyone.

Shikha tells her father that she is behind the drama. Rajveer hears her and drags her to the hall. Ravinder learns that Rajveer’s minister ticket has been cancelled and he takes two guns. Bebe asks Rajveer to leave Shikha’s hand. Rajveer reveals that Shikha called Karuna.

In the upcoming episode, Ravinder will ask Rajveer to choose between him and Ajooni. He will give one gun to Rajveer and he point a gun at Ajooni. Rajveer will point a gun at Ravinder.

Whom Rajveer will choose? Will Ravinder shoot Ajooni?