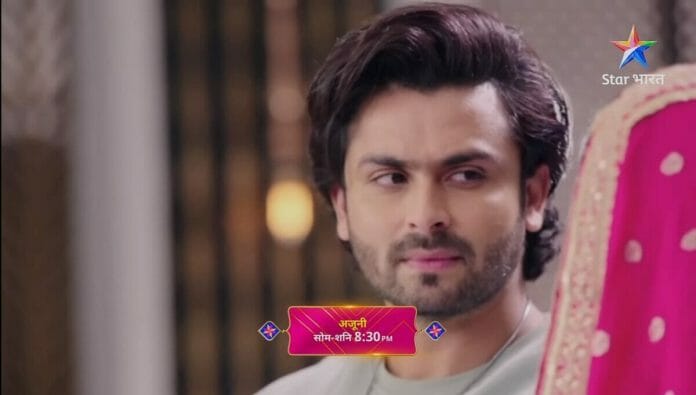 Shoaib Ibrahim and Ayushi Khurana starrer Ajooni is Star Bharat show. This show is about how, despite coming from a middle-class family with strong family values, Ajooni is compelled to marry the guy she despises the most. Now, Rajveer cut off all ties with Harman for tried to separate him from Ajooni so it will be intriguing to watch that what going to happen in the future episodes.

In the current track, Rajveer apologizes to everyone saying that he don’t have much time. He tells Ajooni that he can do anything for her and loses his consciousness. Harman asks him to get up. Rajveer’s friend says that Rajveer is dead due to horoscope. Bebe blames Ajooni. Ajooni asks that how can Rajveer die when she followed everything which Guru Maharaj told her.

Rajveer’s friend says that Guru Maharaj’s foretell became true. Harman says that Rajveer’s horoscope is really good and Guru Maharaj lied about Rajveer’s future. Rajveer gets up saying that this is what he wanted to hear. He says that everything was acting and Jassi helped him.

He adds that Rajveer’s life is not in danger due to Ajooni. Ravinder punishes him. He asks Rajveer to punish Harman.

In the upcoming episode, Rajveer will tell Harman that no one can harm Ajooni until he is alive. He will tell her that he is dead for her.

What Harman will do now? Will Ajooni forgive Harman?