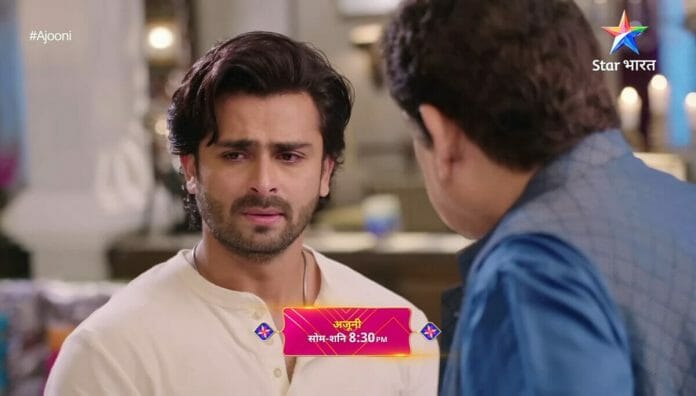 Shoaib Ibrahim and Ayushi Khurana starrer Ajooni is Star Bharat show. This show is about how, despite coming from a middle-class family with strong family values, Ajooni is compelled to marry the guy she despises the most. Now, Rajveer confesses that he killed Harvinder so it will be intresting to watch that what going to happen in the future episodes.

In the current track, Rajveer finds party worker in the hotel room and he beat him up. Party worker informs him that Harvinder tried to kill Rajveer and Ajooni recorded Harvinder’s confession. Rajveer took him to Bagga house. He saved Ajooni. Party worker told the truth to Ravinder. He adds that he feel like Ajooni killed Harvinder. Ravinder plays the recording of Ajooni. Later, Ravinder meets Police inspector.

He learns that Rajveer’s wristband was found in the hotel. He asks Police inspector to close the case because Rajveer is prime suspect now. He beat Rajveer up by showing his wristband.

Ajooni and Harman tries to stop him. Harman says that she lost Harvinder and she can’t lose Rajveer too. Rajveer agrees that he killed Harvinder. Harman slaps him. Ravinder says that Rajveer is dead for him.

In the upcoming episode, Ajooni will ask Rajveer that why he said like that before Ravinder. Rajveer will ask her that why she did that. Harman will overhear their conversation. She will tell Ravinder that Rajveer took the blame on himself to save Ajooni.

What exactly happened to Harvinder? Is Shikha is behind all this?