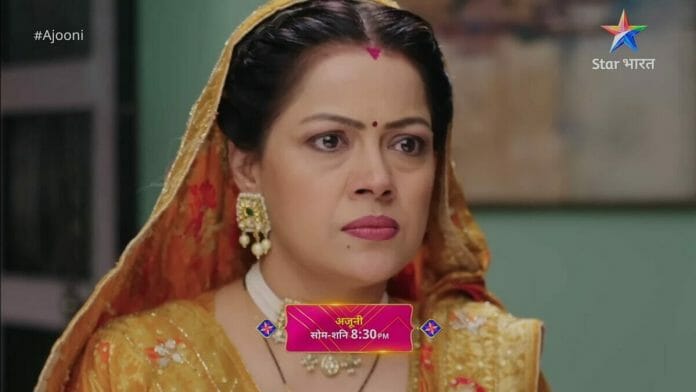 Shoaib Ibrahim and Ayushi Khurana starrer Ajooni is Star Bharat show. This show is about how, despite coming from a middle-class family with strong family values, Ajooni is compelled to marry the guy she despises the most. Now, Durga helps Aman to escape from Baggas so it will be intresting to watch that what going to happen in the future episodes.

In the current track, in Ajooni’s house everyone sits to have food. Aman goes inside to bring sweets. Ravinder enters the house with Harman and Bebe. Harman claims that she saw Aman with Meher in the market. Meher tells her that the latter would have misunderstood.

Baggas searches Aman in the house but does not find her. Ravinder apologizes to Neeru for troubling them. Bua taunts him. He says that Harman’s eye sight become weak and he leaves from there. Harman and Bebe follows him. Durga brings Aman there. She reveals that how she overheard Harman’s conversation with Ravinder and how she took Aman from the kitchen.

She says that she is glad Aman have many people who cares about her. Meher says that Ravinder looked angry and he may do something with Harman.

Will Harvinder realise his mistake? What is Rajveer’s plan? Will Shikha return to Bagga house?