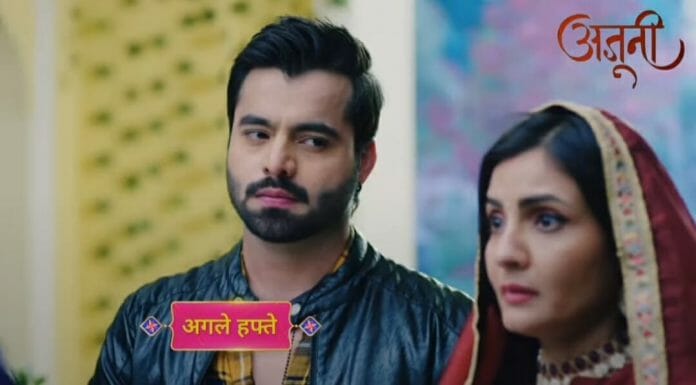 Shoaib Ibrahim and Ayushi Khurana starrer Ajooni is Star Bharat show. This show is about how, despite coming from a middle-class family with strong family values, Ajooni is compelled to marry the guy she despises the most. Now, Dolly joins hands with Harsh against Baggas so it will be intresting to watch that what going to happen in the future episodes.

In the current track, Ajooni stitches Ravinder’s party logo design on Ravinder’s kurta. Ravinder gets impressed seeing Ajooni’s smart work and he praises her. Chamko notices color on Shikha’s hand and she tells about it to everyone. Shikha defends herself. Ravinder pours color on Shikha’s dress and asks her to not change. Shikha thinks Ajooni is behind everything. Later, Shikha meets her mother and tells her about the issues.

Shikha’s mother asks her to stay in their house for few days. Few people comes there and asks about Shikha’s father. One man claims that Shikha’s father took debt from his boss and they want money in two days. Shikha assures her mother that she will do something.

Other side, Harman asks Ravinder to forgive Dolly because Dolly regrets for her wrong deeds. Dolly apologizes to Ravinder so he forgives her. Ravinder warns her to not repeat the mistake. Shikha steals locker key from Aman.

In the upcoming episode, Shikha will ask Harsh what is he doing in Bagga house. Ravinder will ask Shikha that if she know Harsh. Aman will tell Bebe that necklace is missing.

What Shikha will reply to Ravinder? Did Shikha stole the necklace?