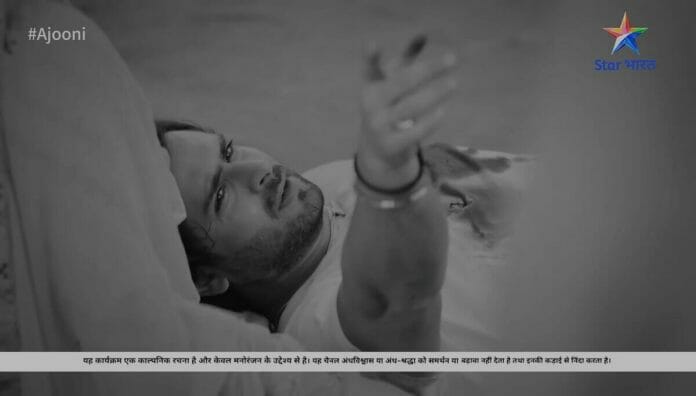 Shoaib Ibrahim and Ayushi Khurana starrer Ajooni is Star Bharat show. This show is about how, despite coming from a middle-class family with strong family values, Ajooni is compelled to marry the guy she despises the most. Now, Rajveer learns about Guru Maharaj’s forecast so it will be intriguing to watch that what going to happen in the future episodes.

In the current track, Rajveer confronts Guru Maharaj. Guru Maharaj tells him that Ajooni is lucky for Baggas but she is unlucky for Rajveer. He reveals about the solution he told to Ajooni. Rajveer asks him to find the permanent solution and leaves from there without noticing that he dropped his phone there.

Chamko provokes Aman against Ajooni. She says that Ajooni trying to impress Ravinder to snatch the house key from Aman. Aman sends Ajooni to wash her room curtains. She makes fish on Chamko’s idea. She serves fish to Ravinder and Bebe. They eats it. Ajooni informs them that today is Amavasya. Bebe scolds Aman.

Ravinder punishes Aman and Chamko. Aman refuses to drink the water which Ajooni gave her. Ravinder scolds her for her behaviour towards Ajooni. Rajveer finds his phone in Guru Maharaj’s place. He hears Guru Maharaj talking to someone on a phone call.

In the upcoming episode, Rajveer will tell Ajooni that he will die if death written in his fate then. Later, Ravinder will save Rajveer from few people. Rajveer will be shooted while saving Ravinder.