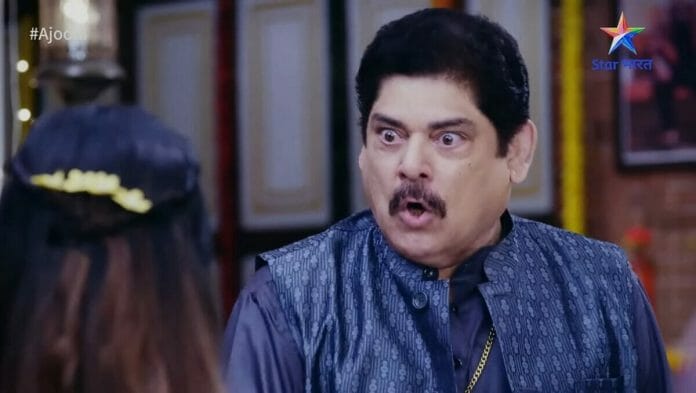 Shoaib Ibrahim and Ayushi Khurana starrer Ajooni is Star Bharat show. This show is about how, despite coming from a middle-class family with strong family values, Ajooni is compelled to marry the guy she despises the most. Now, Ajooni refuses to wear pallu for puja so it will be intriguing to watch that what going to happen in the future episodes.

In the current track, Ajooni cries locking herself in her room. She calls Subhash and tells him that she can’t live there. He her that he will come tomorrow. Rajveer tells his friends about his fight with Ajooni. Rajveer’s friend tells him that this atmosphere is new for Ajooni so it will take time for her to adjust.

Rajveer wonders that how to pacify Ajooni. Next day, Rajveer’s family gathers in the dining table. Ravinder learns that Harvinder is not at house. Bebe tells Dolly to bring Ajooni for breakfast. Rajveer says that he will bring Ajooni and goes to her room.

He apologizes to her. He says that he did everything for her but he did not thought it will hurt her. He tells her that his family eats breakfast together in his house. She says that she is not hungry. He lifts her up. She asks him to drop her down.

He drops her. Bebe and others buys bangles. Subhash and Neelu comes there. Ravinder humiliates them for coming house uninvited. Ajooni asks Rajveer that how can he stay silent. Ravinder tells her that Rajveer married her going against his family.

But she insulted Rajveer always. Bebe learns that Ajooni complaint about her family to Subhash. She lashes out at Ajooni’s parents. Subhash accepts that he made mistake.

Ravinder invites him for Satyanarayan puja. Later, Rajveer tells Ajooni that his family is angry now so everything will be fine soon. Bebe asks Harman to give kitchen work to Ajooni.

In the upcoming episode, Rajveer’s family will scold Ajooni for not wearing pallu for puja. Ajooni will refuse to wear pallu. Ravinder will try to slap Ajooni but Rajveer will hold the former’s hand.