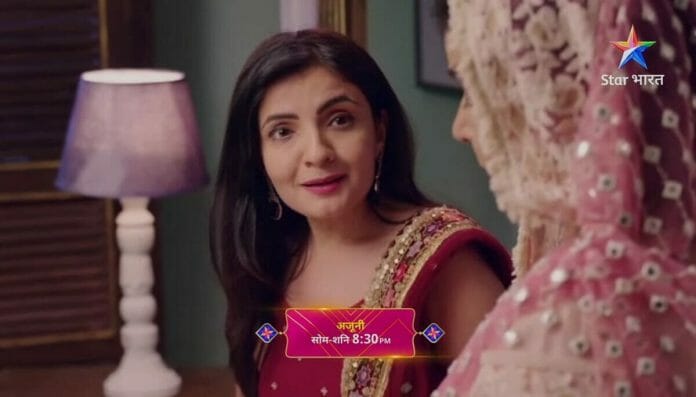 Shoaib Ibrahim and Ayushi Khurana starrer Ajooni is Star Bharat show. This show is about how, despite coming from a middle-class family with strong family values, Ajooni is compelled to marry the guy she despises the most. Now, Shikha is staying in Bagga house so it will be intresting to watch that what going to happen in the future episodes.

In the current track, Harman scolds Aman for wearing color clothes and jewels after Harvinder’s death. She warns her to not leave the room and goes from there. Other side, Shikha’s parents says that they are worried about Shikha’s safety. Ravinder asks them to return to their home.

Bebe says that Shikha won’t go anywhere. She tells Ravinder that she know everything. assures Shikha’s parents that nothing will happen to Shikha. Aman cries telling Ajooni that everything is over. Ajooni consoles her. Bebe, Harman and Ravinder talking about kicking Aman out of the home.

Ajooni overhears their conversation and she tells about it to Rajveer. Rajveer tells her that he will expose Shikha. Bebe cries seeing Harvinder’s photo. She tells Harman that she will send Aman with her parents when they come to attend last rites of Harvinder. Ajooni tells her that Aman won’t go anywhere.

Bebe slaps her and beat her with whip. Media reporters records everything. Rajveer and Ravinder comes there. Karuna claims that Ajooni told her to bring media reporters. She says that now Bebe has to pay for her wrong deeds.

In the upcoming episode, Shikha will tell her father she framed Ajooni. Other side, Ajooni will tell Rajveer that she did not call Karuna. Rajveer will push her hand.

Do Rajveer suspect Ajooni? What will happen to Bebe?