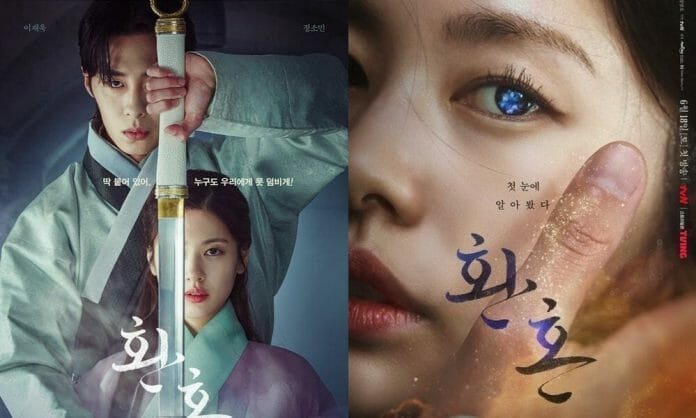 It is shown how Mu Deok landed near the dead man and Master Lee’s soul shifting transformation history. Master Lee gets soul shifted in a little boy who was presumed to he dead while his disciple burnt his body before he could reach the place. However he managed to save his cane on time. On the other hand, So yi was forced to listen to the orders of Cheonbugwan assassinate who kills anyone who knew her identity. One such was the Guard who was the victim of the assassinate’s sword. So Yi and Mu Deok were at the same place and Mu Deok met with Cho Yeon who went there to buy tickets for the magic show. She noticed Park Jin also there and hid immediately. Parked Jin spotted Mu Deok with the dead man and presumed that she killed him but Mu Deok stated that it was not her as she don’t have a sword. They see many people assassinated and from the information they collected they believed that Mu Deok was associated with the killer. Mu Deok escaped in order to not get caught and prove her innocence.

Cut to Master Lee’s place, Lee revealed that he was a soul shifter himself impressing the King. He also revealed that he can’t see soul shifters but he identify them indulging fear in them. He brought a Gwigu as a gift, which could bark and expose the soul shifters. He gave the responsibility of bringing Gwigu in to Jang Wook and promised him a reward if he completed it. Jang Wook unknown that it was a Gwigu at first went to fetch while the Queen scared of getting exposed summoned Jin Mu and their people. She tried persuading the King to not accept the gift from Master Lee and Jin Mu’s men attack Jang Wool and Gwigu. Jang Wook fights with them while Master Lee stopped Jin Mu from stopping him. Crown Prince alerted King about the aftermath of the fights which could cost their friendship with Songrim. Master Identified that Queen is a soul shifter and took his gift back. He also pacified the King saying that there’s another person with King’s Star after Master Seo which is of course Jang Wook.

Mu Deok witness more deaths for So yi while Park Jin informed Maidservant Kim that Mu Deok was an assassin. Mu Deok visited Kim and asked her to help ro prove her innocence. Seo Yul wondered how much Jang Wook knew about Nak Su. They were about to leave when the Crown Prince called them for a private meetingy. They discussed about soul shifter and the ice stone when Jang UK got called for treatment. Crown Prince told about Princess interested on Jang Wook while Jang wook noticed her hairpin resembling the one on the portrait. Jin Mu lashes out at his servant for not informing in prior about the meeting.

So yi came to Mu Deok’s place for her assassin to murder her if she knew her identity. However she found that Mu Deok doesn’t find her and also she got her sight back and left the place. Mu Deok pleaded Cho Yeon to give the witness in her favour to Park Jin but she refused scared to be embarrassed. Mu Deok blackmailed her with her mother and she finally agreed. She took her to Bu Yeon’s room while Mu Deok felt strange seeing the blindfold. Cho Yeon’s mother came in to keep the vase brought by Kim in her daughter’s room only to witness Mu Deok trying the blind fold. She angrily slapped her while Cho Yeon apologized Mu Deok in private. She agreed to give the statement in her favour. Both Wook and Deok were locked by Park Jin. Jin Mu inserted a worm with Cho Yeon’s blood inside So Yi’s body. He also warned her that if she tried to double cross him the worm in her body will eat her alive

Cho Yeon told about Mu Yeong being innocent to Park Jin who understood that So Yi was behind the murders. Kim asked Park Jin to release Jang Wook and Mu Deok but he held them for some other reason. Mu Deok and Jang wook got questioned separately by Park Jin who threatened to kill Mu Deok and lock up Jang Wook permanently if their answers doesn’t match. He asked about their secret and both predicted to not reveal Nak Dubat any cost. So they both revealed the couple Jade and confessed that they liked one another. Park Jin was really shocked with this confession but releases them. Jang Wook asked Mu Deok to continue staying true to her word till the end as Mu Deok doesn’t want to lose her goal for love.