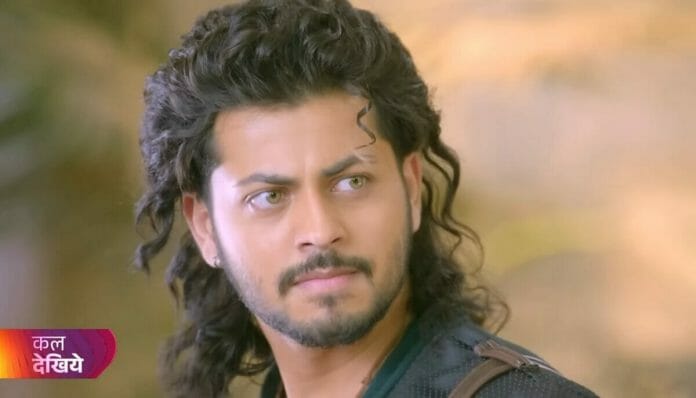 The episode starts with Alifi asking Ali to swear upon her to say if Ali is really dead or not. Ali stammers and can’t tell her the lie and Hasan distracts Alifi. There Poya says they should not stay here as the guards are absolute liars. The kids leave and Ali hides his tears from them. Hasan consoles him. Abdali gets shocked knowing Simmi Jaan is Simsim only. Simsim chokes him and says she is the evil queen. She is the shadow as well, she shows her scary look to Abdali and the latter screams for help. Simsim says she came to Parbaaz to kill the saviour and she even went to Mustafa’s magical world but the latter told him that his son Ali is the Farishta and Saviour both.

Simsim says then she learned Ali is already dead. Abdali falls unconscious and She says she will erase his memory to hide her identity. She will use Nazia for her motive now. Ali feels guilty for hurting his kids. He says he is doing wrong to them to which Hasan says he is thinking of everyone’s good only. Ali says he won’t reveal his identity until he frees Marjina from Simsim’s trap. Hasan says but he has to be careful with the kids as they were asking questions a lot. They may find out the truth, Ali says he knows and he will stay alert. He says he lost his father, brother and Marjina in this battle. He can’t take risk with his loved ones now. He leaves with Hasan to create a new scene in Parbaaz. The beggar stops Hasan and talks nonsense. He tells about the gem to Hasan and the latter can’t recognise it so he tells the beggar to leave. Nazia and Ali’s friends cry for Ali’s death and everyone says he should have told them about his power. Zarifa says maybe Ali wanted to save them from danger. Nazia mourns that she misunderstood Ali but he was the one who performed last rites for Kasim. She will regret for cursing him.

Simsim shows fake concern to kids and Nazia for Ali’s death. Poya and Nafi says their father can’t be dead. Simsim tells them to accept the harsh truth. Alifi says she believes in miracles and she knows Ali will be back soon. Simsim controls her anger, Ali makes his entry to the orphanage. He says why everyone gathered here to cry for Ali Baba. He is gone so they should leave. Nafi throws a glass at Ali but the latter catches it on time. He says their father didn’t teach them manners. Ali’s friends scold him for his rudeness. Garifa is about to hit him but Ali makes him fall down. Ali says saviour was not a hero in true sense, he used to give them coins for free that’s all. Ali says he wants to find out the special power saviour had.

Simsim says it was the talisman only. Hasan brings Ali’s clothes to them and his kids cry holding his last sign. Ali says it proves saviour is dead and he was not lying. Simsim says with Ali’s death she lost the chance to know about Talisman. Ali leaves the place.

Precap- Simsim possesses Nazia saying she will learn about the sword and will use it for her purpose. There Alifi follows Ali and says she wants to give him something.