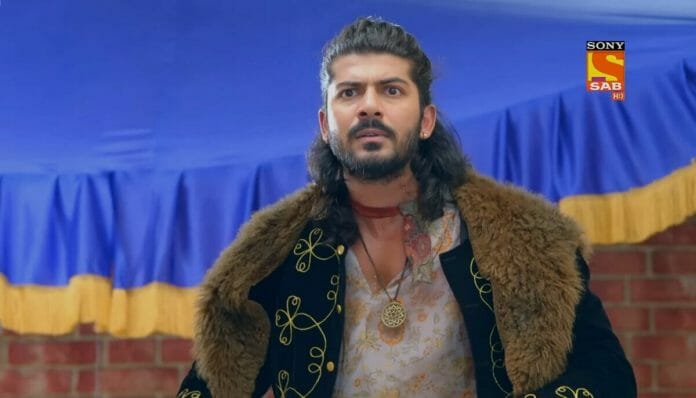 Sab TV launched a brand new show named Ali Baba-Dastaan-e-Kabul starring Sheezan Khan and Tunisha Sharma. The shows revolves around Ali and Mariam’s struggle to save Kabul from the terror of Iblis and his forty thieves. Simsim is trying her best to wake Iblis up by getting the Talisman gem but will she succeed that will be interesting to watch.

In previous episode, Ali senses the arrival of thieves and he cautions everyone to escape. Ali and Mariam wish to stop the thieves by making them fall down inside the ground. It happens due to the Talisman lockets and it surprises Simsim.

She again gives courage to the thieves to go back to attack the Kabul people. Ali saves Kasim and Nazia and sends them home safely. There Mariam escapes from her captivity and finds Darakaazi. She tries to call him but unfortunately fails. Saddam gets angry as Simsim betrayed him by sending the thieves before his exit.

Ali saves Mariam and drags her from the Bazaar but she tells him to leave her alone. They see each other and Mariam recognises him. One of the thieves get a part of the Talisman from a lady who stole it from Mariam.

In future episode viewers will see, Mariam will tell Ali how to escape from the captivity. Ali will say they have to wait but she will say he has no idea they are in grave danger.

Baizaad will send message to Saddam to identify Mariam. Saddam will reach the same place in disguise. He will come towards Mariam to attack her with a knife. Mariam will get afraid.