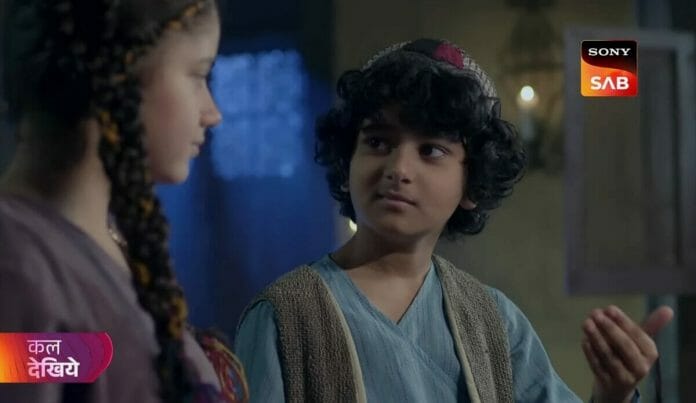 Sab TV launched a brand new show named Ali Baba-Dastaan-e-Kabul starring Sheezan Khan and Tunisha Sharma. The show revolves around Ali and Mariam’s struggle to save Kabul from the terror of Iblis and his forty thieves.

Simsim is trying her best to wake Iblis up by getting the Talisman gem but will she succeed that will be interesting to watch.

In previous episode, Ali tells Mariam to be cautious so that her enemy can’t outsmart her, Fatima notices them together and feels jealous. Mariam wakes up at midnight and goes to Aman Sarai to kill Saddam. Poya meets the Babaji and returns back the Taabiz as it had no effect on Mariam. Shifazan tried to catch Poya in midway but Alifi saves him.

Shifazan possesses Alifi and Imad, he tells them to look for the Talisman. Ali goes to check Shifazan’s medicines but finds nothing wrong. Shifazan looks at his magical stone which is helping him to hypnotize the kids of Parbaaz. Ali sees that.

There Mariam disguises herself as a maid and goes to Saddam holding a sharp knife. Alifi and Imad attack Nazia and Nafi suspects something is wrong with these two. They push away Nafi when he questions them about their strange behaviour.

In future episode viewers will see, Mariam will get questioned by Baizaad when she will try to attack Saddam. There Imad and Alifi will find the other half of the Talisman and will decide to give it to Shifazan. Shifazan will tell Ali to come out of his hideout.