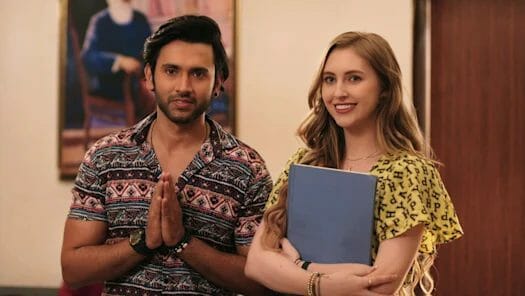 Star Plus newly launched Anandi Baa Aur Emily is winning hearts with their less dramatic take. The show is breathing fresh and has a good dose of comedy in between. Aarav and Emily’s accidental marriage was enjoyed by the fans. Reviewing the show, social media users quoting the show is impressive and they have already added it in their watch list.

Apart from the show, actor Mishkat Varma’s acting is being adored. He was part of famous daily that includes ‘Nisha Aur Uske Cousins’, ‘Icchapyaari Naagin’, ‘Divya Drishti’ among the others. Mishkat is breathing in the character of Aarav. Right from his acting to Gujrati accent, fans loving Mishkat’s acting in the show.

Make some noise for “AARAV SANGHANI” the most cutest and adorable ML on itv rn!! Mishkat you’re killing it as Aarav and Your gujarati accent is loveee

Such a fantastic show… What a comic timing man.. The girl playing gunjan is just too good.. Stress buster show

Perfect casting of leads nd other characters.. Watch it if u r a rom-com lover.. #AnandiBaaAurEmily

10/10 to the casting director for the perfect casting for the show Each and every character is doing a decent job and not so ott. #AnandiBaaaurEmily

On Story front, after getting love and care from Mridula, Emily desires to be in a joint family. She shares with Aarav and says she wants to stay back. Aarav tells to Emily that if family will not approve their marriage than eventually they will get separated. Emily gets scared and refuses to marry. In the upcoming episode, Emily will give a test to become Anandi’s bahu. Will she be able to impress Anandi? Will Aarav be able to help Emily? Time will tell. Shoot your review on Anandi Baa Aur Emily in the comment section below.