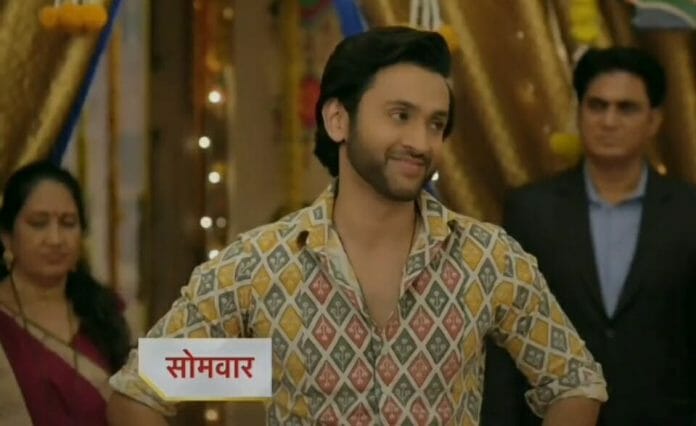 Previously, Gunjan morphed Emily’s pictures and gave it to Harsha and her family as a proof. Whereas, Chirag presented the photos to Anandibaa and Inspector Sangeetha. Anandibaa declared her shocking decision and asked Emily to go along with Chirag, but the latter denied.

In the current track, Anandibaa feels bad for Emily and keeps thinking about her decision, while Gunjan comes there and manipulates her. She reminds Anandibaa about her reputation while the latter decides to get Aarav married to Pinky, as soon as Emily will go along with Chirag.

Here, Gunjan gets elated and reveals the news to Pinky. They both celebrates while the latter scares Gunjan stating that what if Anandibaa found about their ploy? Meanwhile, Aarav shares his worry with Jaman and decides to send Emily away from there, in order to stop her from going along with Chirag.

Aarav gets tensed thinking that if Emily goes out of his life, then his dream to visit America will never get fulfilled. He plans to meet Emily privately, while the latter starts her packing being angry with God that he isn’t helping her.

Ahead, the God appears in front of Emily and ask her to fight for her rights. Meanwhile, Gunjan accompanies Emily to the market. Aarav somehow takes Emily away from Gunjan and hides from her. He discuss about his plan with Emily but she denies to run away from there.

Aarav makes her understand and tries to convince her, whereas Gunjan gets worried and notify Sangeetha about the missing of Emily. Whereas, they both goes to find the latter.

Later, Emily expresses her love towards Aarav while he also fakes his in order to convince her. She states that they both will fight for one another, while he replies that Anandibaa won’t approve their love as for her reputation comes prior then anything else.

Whereas, Jhalpa will get dumbstruck and denies the request, while all looks at her being shocked. Emily will smile and sees Aarav, while Inspector Sangeetha will also gets confused with Jhalpa’s reaction.

Will Aarav be able to save Emily?