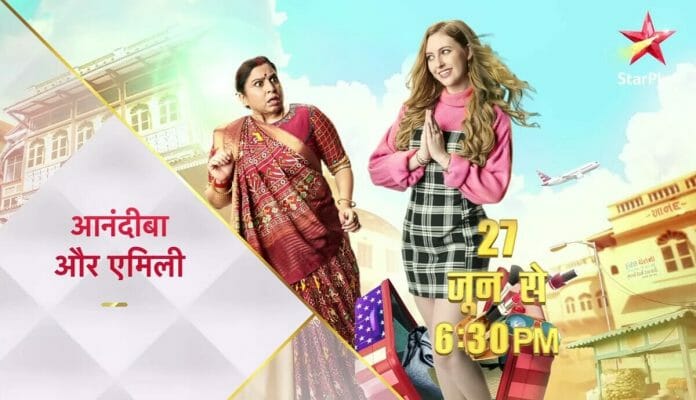 Star Plus popular serial Anandibaa Aur Emily is gearing up for some intense drama and interesting twists in the upcoming story.

This week the storyline showcases Anandibaa conducting Aarav and Pinky’s engagement, while mistakenly Emily wears the engagement ring. Everyone gets shocked, while Anandibaa takes the ring and decides to purify it before proceeding to the engagement of Pinky and Aarav.

Here, Gunjan convinces Anandibaa not to delay the marriage and calls the priest for the date. Whereas, Aarav shares his worry with Jaman and states that he doesn’t want to marry Pinky. Jaman makes a plan and bribes the priest to make some complications in horoscope and delay the wedding.

The priest says to Sanghanis that there isn’t any auspicious day before 2 years and states that if Pinky gets married to Aarav then she will die. The latter gets scared and denies to marry him, while Gunjan makes her understand and ask not to worry. She brings out a solution and proclaims that Aarav can marry a tree first and then can marry Pinky, so that everything will get fine.

Elsewhere, Anandibaa praises Gunjan’s idea and fixes Aarav’s marriage with Pinky. Whereas, Aarav and Jaman plans to kidnap Aagya in order to delay the marriage, as well as get the money to visit America. They goes to the restaurant to get some mens who can help them in kidnapping.

Aarav meets Emily and sees her happily feeding the people. She tells him about her wish to get a loving family. She gets emotional telling about her parents and their divorce. Meanwhile, Aarav gives a promise to Emily and determines to fulfill his wish.

Ahead, Aarav and Jaman keeps an eye on Aagya and ask their mens to kidnap him, but they kidnapped someone else. Aarav gets frustrated with them, while Gunjan and Anandibaa comes to the temple and takes Aarav along with them. Further, Aarav meets Emily and sees her in intoxicated state. She shows her desire to marry him and ask to convince Anandibaa.

Aarav also says that he wanted to marry her but declares that they can’t be together. He goes away from there after informing about his marriage with Pinky. Whereas, Aarav forcefully marries the tree, while Gunjan gets restless to tie her sister Pinky with Aarav.

At that time Emily falls upon Aarav’s arm from the tree and the priest declares their marriage. Everyone gets shocked, while Jaman ask Aarav to take the opportunity of the moment. He says that he can visit America with Emily’s help and then goes to cancel the kidnapping of Aagya.

Further, Aagya gets successful in untying himself and tries to see the faces of the kidnappers. They all runs away from there and creates a chaos. Whereas, Jaman advice Aarav to help Emily to settle before going to America. Meanwhile, Anandibaa unwillingly accepts the marriage and everyone appreciates her decision, except for Gunjan and Pinky.

Gunjan tries to instigate Anandibaa against Emily and talks about divorce, but the latter denies and says that marriage is a pure relationship. Meanwhile, Emily gets conscious and finds about her marriage. She determines to have a personal conversation with Aarav before accepting the wedding.

Later, Emily takes Aarav to upstairs and contribute about his feelings for her. She says that if he doesn’t love her then she won’t accept the marriage. She also tells about her parents and says how she suffered because of them. She proclaims that she want a happy family, while Aarav lies to her about his feelings thinking about using her to visit America and tells that he likes her.

Emily gets excited and goes downstairs. She ask Anandibaa to start all the rituals, while the latter proceeds to do so. Emily spoils all the rituals by doing it weirdly. Aarav and Jaman gets worried seeing her actions, while Anandibaa gets furious. Gunjan taunts the latter, whereas Kanchan makes her understand about how to do it.

Jaman ask Aarav to correct Emily’s mistake but the latter denies and tells his hidden motive. He says that it’s better for Anandibaa to get irked by Emily, so that she can let them go to America without any hurdle. He only focuses im fulfilling his childhood dream, while Emily enters inside the house.

Here, Anandibaa imagines to throw Emily out of her house, but controls herself. Whereas, Gunjan plans to get rid of Emily as soon as possible. Anandibaa keeps a shocking condition in front of Emily, while the latter assures to impress her. She also changes her attire to become traditional.

Emily takes help from the internet to become a typical daughter-in-law. Emily also takes an oath to not start her marriage with Aarav before impressing Anandibaa. Meanwhile, Emily shares her room with Emily, while Gunjan ask her sister to keep an eye on the latter.

Later, Sanghanis manipulates Anandibaa against Emily and warns her. Whereas, Anandibaa tells about the midnight puja and wakes everyone of her family, meanwhile Emily also joins them being excited for it.

Now in the upcoming episode, Emily will try to find ring and goes towards the cows. She will move a metal detector in front of cow’s dung and explains that it will start making sound, if the ring will be there. Everyone will surround her to search for the ring. Whereas, Emily will unknowingly moves the machine towards Pinky’s bag. The machine will start making sound, while everyone gets shocked. Anandibaa will question about it, while Gunjan lies to her. Anandibaa will catch Gunjan’s lie and confronts that she has already taken all the jewelleries from Pinky, while the latter will get scared. Lot more drama and twists to come in Anandibaa Aur Emily, don’t miss watching the show. Stay tuned with us for more Spoilers, informations and written updates of your favourite shows.