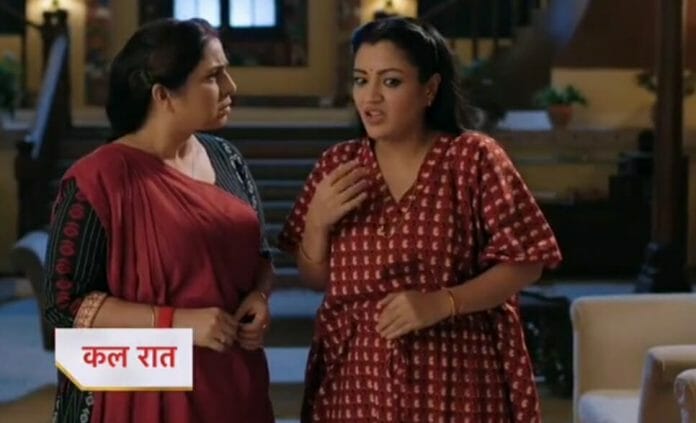 Star Plus popular daily soap Anandibaa Aur Emily is grabbing the attention of the audiences. Viewers are loving the track, whereas the twists in the story is keeping them hooked to their television screens. Previously, Payal helped Emily to find about the ways to impress Moti Baa’s spirit.

The latter prepared sweet dish for Moti Baa and it got accepted, while the photo frame of Emily also got repaired. Sanghanis thought Moti Baa accepted Emily and Anandibaa unwilling decided to give the chunri to her.

In the current track, Emily denies to take the chunri from Anandibaa and reveals the truth to everyone. She told how Aarav and Jaman replaced the photo frame in order to help her. She recalls the way Aarav consoled her and assured that he will make Anandibaa accept her.

Here, Anandibaa glares at Aarav and Jaman, while the latter confesses the truth and notify that he just wanted to help Emily. He proclaims that she was stressed about the matter and he just wanted to assure her.

Payal comes there and suggest Anandibaa to give thr chunri to Emily, as she has spoken the truth, even when she had the option to hide it. Meanwhile, Anandibaa questions about the acceptance of sweet dish by Moti Baa’s spirit, to which Emily reveals that Gulab is behind it. The latter accept the truth and says that he was tempted by the dish.

Ahead, Gunjan and Pinky smirks stating that Emily won’t be able to take the chunri from Anandibaa, but shockingly she gives it to Emily. The latter denies to accept it and says that she will take it only when Anandibaa will accept her from her heart.

Anandibaa meets Priyanka and feels proud of her marriage with Nilesh, as she was the one who approved it. Meanwhile, Priyanka shares her worry with Emily and Pinky. She also insists the latter to help her in getting divorce from Nilesh as he abuses her, but proclaima that she don’t want to reveal the truth to anyone.

Now in the upcoming episode, Pinky and Gunjan will help to dry Anandibaa’s hair, while the latter will ask them to look into Aarav’s matter. Gunjan will replace Aarav’s shampoo, while he takes a bath and gets shocked seeing himself as a bald.

Meanwhile, Anandibaa will proclaim that she wants to see if Emily will do the things she said or not? She will state that the fight is in between Emily and her.

Will Emily clarifies the misunderstanding?

Will Priyanka tell the truth to Anandibaa?