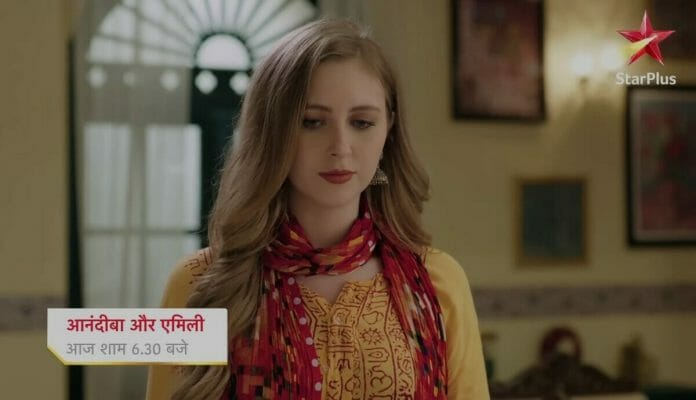 The peculiar twist in the tale of Star Plus popular daily soap “Anandibaa Aur Emily” is enthralling the audiences. Previously, Gunjan’s plan failed to expose Emily but the latter keeps trying to fulfill her motive.

She notified Pinky about her new idea and makes Emily wear a long wig. She gained Anandibaa’s trust as well as convinced Jaibala to attend the Muh-Dikhai ceremony. She pretended to help Anandibaa but in reality she tried to break Aarav and Emily’s marriage.

In the current track, Emily gets nervous to attend the Muh-Dikhai ritual, while Gunjan and other ladies brings her downstairs and makes her sit. Jaibala gets suspicious seeing her long hair and discuss about it with Anandibaa, while Gunjan makes some excuses to save Emily.

Here, Anandibaa shares her worry with Gunjan and questions that how they will prevent Jaibala from seeing Emily’s face? To which Gunjan assures the latter and tells that she will turn off the lights. Anandibaa gets impressed with Gunjan’s plan and blesses her.

Pinky doubts Gunjan’s intentions and ask if she will help Anandibaa? To which the latter explains her plan to Pinky. She assures that she is always in support of her sister and proclaims that she is faking her care towards Anandibaa.

Ahead, Gunjan just dims the light instead of turning it off. Whereas, Jaibala sees Emily’s face and notices her eyebrows. She gets doubtful and confronts about it with Anandibaa, while the latter takes Gunjan’s help to tackle the situation.

At that time Gunjan intentionally keeps her leg on Emily’s wig and exposes her truth in front of everyone. She apologises to Anandibaa and says that it was a mistake, while the latter blames herself for all the problems. Whereas, Jaibala gets shocked and taunts Anandibaa. She ask the latter to make a tough choice.

Later, Jaibala reminds Anandibaa about the past and ask to choose in between Aarav’s marriage or her authorities. Anandibaa gets into turmoil, while Emily confronts Jaibala and impresses her. Aarav also takes a stand for Emily and makes Jaibala understand her mistake. She accepts their marriage and also permits her daughter to marry the foreigner guy.

In the upcoming episode, Gunjan and Pinky will intentionally talk in front of Emily and lies about Anandibaa’s Asthma problem. Meanwhile, Anandibaa will practice yoga and Emily misinterpret that the latter is getting Asthama attack and goes inside the kitchen to get the medicine powder to cure her.

She will feed the powder forcefully to Anandibaa, while the latter gets furious at her. Anandibaa will confront Emily for her action, while she will tell the truth to everyone about hearing Gunjan and Pinky discussion regarding Anandibaa’s attack.

Will Emily be able to impress Anandibaa?