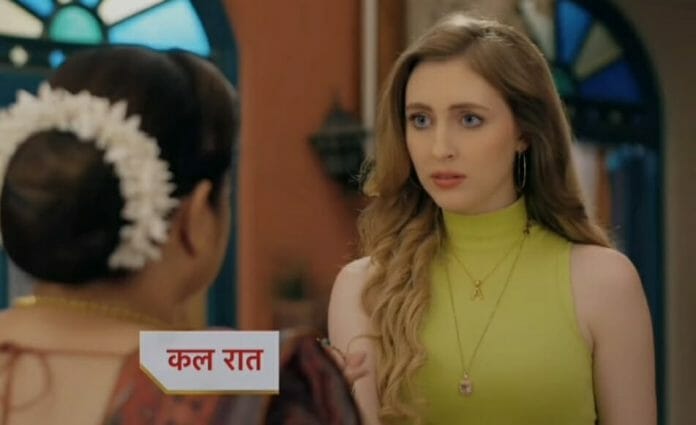 Star Plus popular daily soap Anandibaa Aur Emily have garnered a huge amount of audience. The gripping storyline filled with twist and turns makes it engaging to the viewers. Previously, Priyanka asked Emily for help but hided the real reason to divorce Nilesh from Anandibaa.

Emily got into trouble while helping Priyanka, while the latter insisted her to hide the truth till she gets rid of her husband. Meanwhile, Gunjan manipulated Anandibaa and they decided to use the opportunity against Emily.

In the current track, Gunjan swapped Aarav’s shampoo with hair removal cream and the latter lost his hairs. He gets shocked seeing himself bald and worries about Emily leaving him. He ask Gulab, Aagya and Jaman for help, while the latter gives a wig to Aarav in order to hide the truth from his family.

Here, Pinky finds about Aarav being bald and tells Gunjan and Anandibaa about it. They plans to expose him in front of everyone in order to make Emily leave him and the house.

Anandibaa tries to stop Priyanka from taking divorce from Nilesh, but the latter involves Emily into the matter and proclaims that she will also leave Aarav if he gets bald. Emily gets into turmoil as Priyanka asked her to support her in the matter.

Ahead, Payal gets concerned for Emily and ask Priyanka not to trap the latter in an complicated situation. Priyanka assures them that Aarav won’t loose his hair and proclaims that her wedding will be safe. Whereas, Anandibaa makes Emily take a vow that she will leave Aarav when if he will get bald.

Emily agrees to Anandibaa’s condition while Aarav and other males gets shocked. They ask Aarav to tell the truth to Emily but he gets scared of losing her.

Later, Anandibaa makes the lawyer prepares all the divorce papers and then ask Aarav to donate his hair to the temple as she made a wish for it. Whereas, everyone gets shocked hearing about her request.

Now in the upcoming episode, Anandibaa will perform puja for daughter-in-law and does aarti of Gunjan. The latter will smile at Anandibaa, while Payal question her that if she will make Emily sit on the other chair for the puja, as she is the second daughter-in-law.

Aarav will ask Emily to sit on the chair, but Anandibaa will stop her. She will tell that Emily is only their guest for a few moments, while everyone gets shocked.

Will Anandibaa and Gunjan’s plan work?

Will Emily be able to save her marriage?