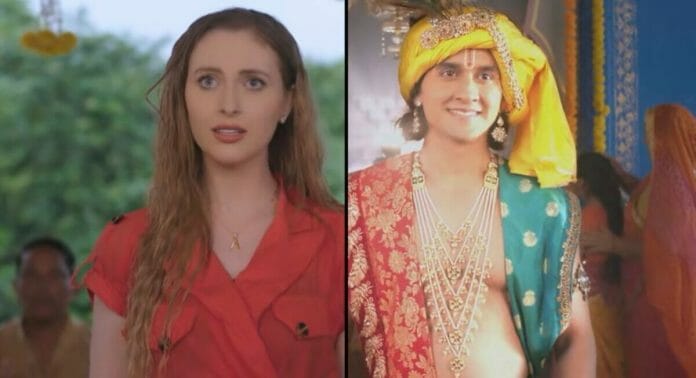 Previously, Emily and Aarav together prepared halwa for the competition, while Pinky and Gunjan tried to spoil it but gets unsuccessful. Meanwhile, Gunjan replaced Emily’s halwa from the competition and the latter lost the challenge. Anandibaa and Gunjan reminded Emily about their deal and ordered the latter to leave the house.

In the current track, Emily gets shattered by the result and insists Anandibaa to give a second chance. The latter denies Emily’s request and ask her to go back to America. Whereas, Gunjan also suggest Anandibaa to get Emily’s signature on the divorce papers, so that they can easily be able to separate Aarav from her. Anandibaa praises Gunjan for her idea.

Here, Emily rushes out of the house leaving her stuffs in order to find God. She recalls Gunjan’s words that only God can help her to get a second chance. She keeps searching for God, while a priest sees her struggling and takes her inside the temple and ask to pray in front of the God.

The priest instructs Emily to do a hard task to impress God while she passes the test. Lord Krishna appears in front of her while she gets mesmerised and ask if he is the God. He smiles at her innocence and explains her that she can find him everywhere.

Ahead, Emily questions the God that why she always fails to get love, to which the God ask her to keep trying and assures that one day she will succeed. She also complains about loosing the competition, while he suggest her to return back to the house and assures to be with her, but no one can see him except for her.

Emily gets back to Sanghani’s house, while at that time the lady of the halwa competition also comes there and notify that Emily won the competition. The latter gets elated and Anandibaa permits her to enter the kitchen. Meanwhile, Emily determines to impress Anandibaa.

Later, Gunjan gets frustrated as her plan flooled, while Aarav also gets irked and shares his problem with Jaman. Whereas, Anandibaa sees a nightmare that Emily will capture her place and notify about it to Gunjan, while the latter scares her more and instigated against Emily.

To which Gunjan assures that she will teach her. Whereas, Gunjan will make a new plan against Emily. Aarav will tell Anandibaa that they have to complete all the rituals of the marriage and reminds about the pag-phera ritual.

He will proclaim that he have to take Emily to America for some days in order to complete the ritual, while the latter will get shocked.

Will Emily be able to make chapati?

Will Emily be able to win Anandibaa’s heart?