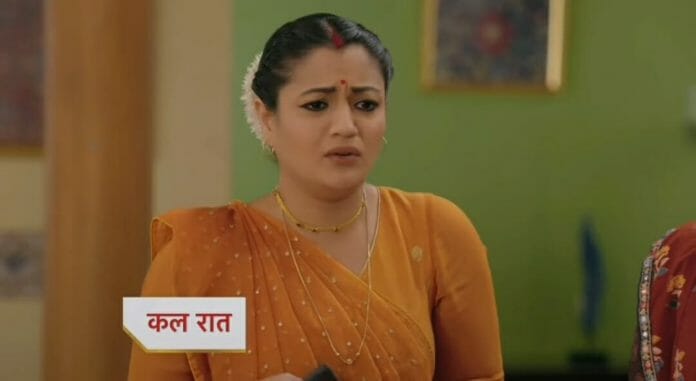 Star Plus popular daily soap Anandibaa Aur Emily is unravelling lot many dramas with each passing day. The show is making the viewers curious, with its unpredictable storyline. Previously, Emily heard Gunjan and Pinky’s confession about their crimes and decided to expose the latters. She notified Aarav and Jaman about her plan but they got fooled by Gunjan and she stole their money. Meanwhile, Aarav got determined to catch the culprit.

In the current track, Emily reminds Aarav about the itching powder which they had spreaded on the money and ask to check Gunjan and Pinky’s hands. They notify about it to the family members while both the sisters stops their urge to itch their hands in front of others.

Here, Aarav ask the family members to dip their hands into a chemical substance, so that they can catch the real culprit. Everyone does the procedure but Pinky and Gunjan denies to do it. The latter ask Pinky to sacrifice herself for her but the latter denies.

Aarav lies that of the culprit confesses her truth on her own then the Punishment will get less. Pinky gets manipulated by Aarav’s words and confessed about stealing the money. She also points out at Gunjan for being the mastermind.

Ahead, Aagya and Anandibaa confronts Gunjan but the latter denies all the allegations and acts to get shocked by Pinky’s revelation. She rebukes her sister and ask her to go out of the house.

Aarav tells about the matter to Emily and says that they needs Riddhi to continue their plan in order to expose Gunjan. Whereas, Payal gets suspicious about the latter and stays around Emily to protect her from Riddhi.

Later, Gunjan gets furious at Aarav and Emily for fooling her and determines to take her revenge from them. She apologises to Pinky for not being able to save her while Anandibaa shows her disappointment towards Pinky and proclaims that she never expected it from her.

Now in the upcoming episode, Aarav will get inside the house along with Riddhi. He will tell Anandibaa that she was stressed after the allegations of stealing upon her and so he consoled as well as married her. He will proclaim that he was with Riddhi the whole time, while Anandibaa will drag the latter and make her stand in front of the house door. Whereas, Riddhi will look at her being shocked.

Will Emily’s plan gets successful?

Will Aarav and Riddhi continues their plan?