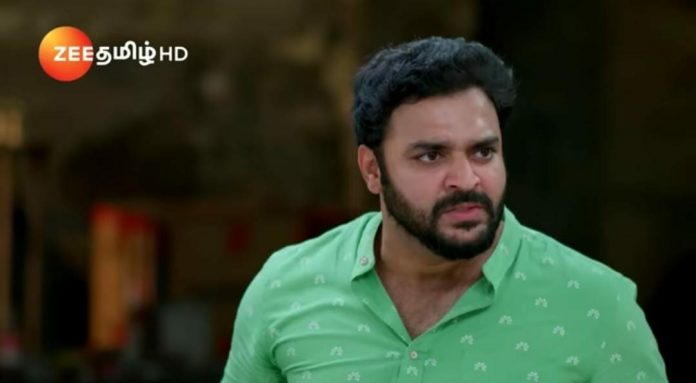 Previously it was seen that Baskar phoned Aarasi, but Arasi didn’t believe that he was Baskar. She mocked him and disconnected the call. Later Baskar called Arasi again and said that he was at his house and Oviya was with him. A worried Arasi reached home and looked for Oviya. She got worried not finding her.

Baskar called Arasi and said that he kidnapped Oviya to take revenge from Shivam. Arasi pleaded with Baskar to leave Oviya. Later Arasi saw the inspector Surya and said that Baskar kidnapped her daughter. Surya refused to believe her as she told him few days before that Shivam killed Baskar.

In today’s episode it will be seen that Shivam will decide to take the ransom to Baskar. Inspector Satya will say to Shivam that he doesn’t feel right that he goes alone with money to meet Baskar. Shivam will come to Baskar’s location and will say that he brought the money he demanded. He will ask where his daughter Oviya is.

Baskar will show a remote and will say that he put bomb in Oviya’s body. Shivam will fight with Baskar. On knowing that Shivam took police help despite his warning, Baskar will press the remote and the bomb will blast shocking the police.

What will happen next? Will Shivam be able to save Oviya from Baskar’s clutches?