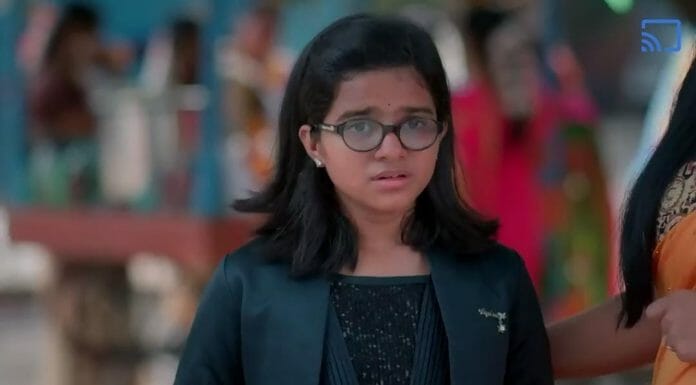 Zee’s popular daily soap Anbe Sivam is gearing up for high voltage drama with Anbu killing Baskar to save Iniya from his clutches.

Previously it was seen that Anbu noticed Baskar in the temple and notified to Shivam. But the latter said that Baskar was in the jail and it was her misconception. However Baskar was indeed escaped from the jail and reached that temple. He kidnapped Iniya and tried to shoot her. In order to save Iniya Anbu hit Baskar with a stick and took the gun and shot him.

In today’s episode it’s seen that Anbu cries remembering shooting Baskar and breaks into tears in front of Shivam. She calls herself as murder. Shivam tries to console her. He says that Anbu didn’t murder Baskar, but it was a self defense act. He says to Anbu and Iniya to not tell to anyone even Kalai and Bharathi about what happened with Baskar and forgot it. He promises to protect Anbu and the family and says that he will do the necessary.

Shivam comes to the place where Anbu shot Baskar to dispose his body and is stunned finding few goons having liquor there. He gives the excuse of coming to buy alcohol and sits there itself to consume it. Meanwhile Arasi sees Anbu and Iniya cry hugging. She comes to them and finds that Iniya has scratches on her hand. She doubts that something has happened and questions Iniya.

The latter gets nervous and lies. Arasi refuses to believe Iniya and threatens her to tell the truth. Shivam waits the goons to leave. After they left, Shivam to dispose Baskar’s dead body. Shivam stops Arasi from asking further question to Iniya and sends her away. However Arasi gets suspicious that they all hide something from her.

Will Shivam be able to save Anbu? Will Arasi find out the truth?