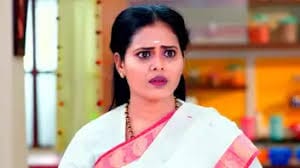 Zee Tamil daily soap Anbe Sivam is getting interesting with the court declaring Anbu guilty of cheating Dhayalan and giving her one week time to settle the money to Dhayalan else she will be arrested,

In the previous episodes it was seen that Geetha blamed Anbu’s ego problem for all their trouble and persuaded her to take Sivam’s help. Anbu received the video recording in which Sivam and Harish are seen talking. Anbu misunderstood that Harish is Sivam’s man and Sivam took revenge on her. Anbu met Sivam and lashed out at him. Sivam and his friends looked clueless first and asked Anbu to explain her anger. Anbu showed the video and accused Sivam of plotting against her. She berated Sivam. Sivam’s friend told Sivam that only Aarasi has motive to create misunderstanding between Sivam and Anbu. A furious Sivam decided to confront Aarasi.

In today’s episode it will be shown that Sivam will confront Aarasi. Sivam will ask Aarasi to not hurt Anbu as her enmity is with him. Aarasi will say that she got to know that Sivam gets if she harms Anbu, so she won’t leave her hereafter which will enrage Sivam. The latter will break a vase out of anger. He will warn Aarasi. Other hand After Anbu will sell her jewels and mortgage the land she bought to arrange for the money. Malar will sell her jewels and will give that money to Anbu to help her. Geetha will give Anbu her savings. Anbu will put all the money in the cupboard. As she will need few more lakhs, she will go to sell her car. Meanwhile Anbu’s mother in law, who will see this, will call Baskar home and will hand that money to her.

What Anbu will do now? How she will come out of this trouble?