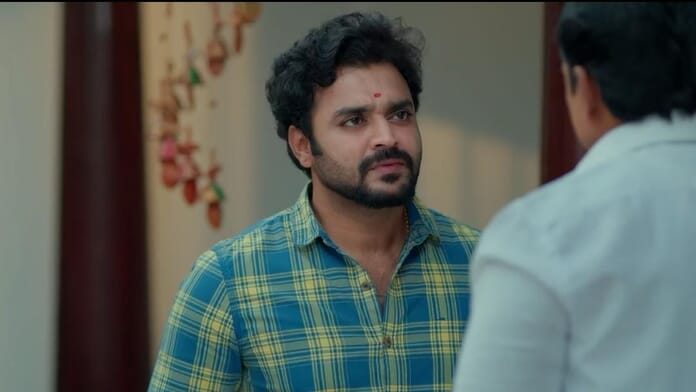 In the previous episodes it was seen that Baskar met a broker to buy a second hand car. Unaware of this, Anbu sold her car to that broker. After Anbu left with Malar and Geeta, Baskar bought Anbu’s car. Anbu asked Malar to bring Money from her cupboard. Malar got shocked not finding the money there and informed Anbu about the same. Anbu, Geeta and Malar were clueless where the money has gone. Malar doubted Kamakshi and asked her if she has given Anbu’s money to Baskar to which Kamakshi denied it initially, but confessed her betrayal in the end. Anbu threw Kamakshi out of the house. Sivam, who got to know this through Geeta told his parents about this. He also revealed about Aarasi being the reason for Anbu’s trouble. Sivam’s parents ordered Sivam to help Anby by paying her debt and gave their house document so that he can mortgage it and get money.

In today’s episode it’s shown that Anbu is struggling to arrange money. Sivam comes to Anbu and offers help. He gives her money and asks to pay to Dhayalan, but Anbu strongly refuses to take his help and leaves hurting Sivam. Later Anbu breaks down in front of Geeta and tells her that she decided to flee the city as she can’t repay the amount. Sivam’s friend tells Sivam to give the money directly to Dayalan. The next day Sivam meets Dhayalan and repays Anbu’s debt. However he gets shocked learning that Anbu fled the city with her whole family.

Where Anbu went with her family? Will Sivam be able to find them?