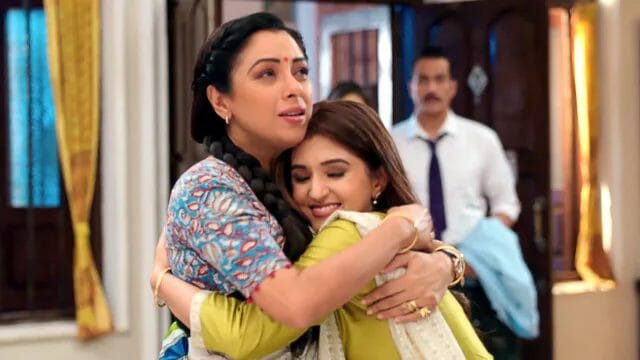 In today’s episode, doctor informs Kapadia and Shahs that Vanraj and Anuj is critical but they are shifting them to ICCU. He says they can see them. Anu dream Anuj and Vanraj is fine and they have decided not to fight. She smiles in her dream. Kinjal, Dolly and Pakhi say Anu might be seeing a good dream. Dolly says she wish Anu’s dream comes true. Anu wakes up and asks about Anuj and Vanraj. She insists Pakhi to take her to Anupama. Dolly and Pakhi convince Anu to sleep more.

Anupama receives Anu’s message. She cries. Samar breaks down. Anupama console Samar and asks him not to cry as this too shall pass. Doctor inform Vanraj has started responding to the medication. Shahs get relaxed.

Anupama asks about Anuj. Doctor informs Anuj is not showing progress. He adds he is shifting Vanraj to the ICU and they can meet him. Doctor tells Anuj will stay back at ICCU. Anupama breaks down. Hasmuk asks Anupama to stay strong. Anupama worry why Anuj isn’t responding to the treatment. Leela console Anupama. Anupama cry recalling her moment with Anuj. [Episode Ends]