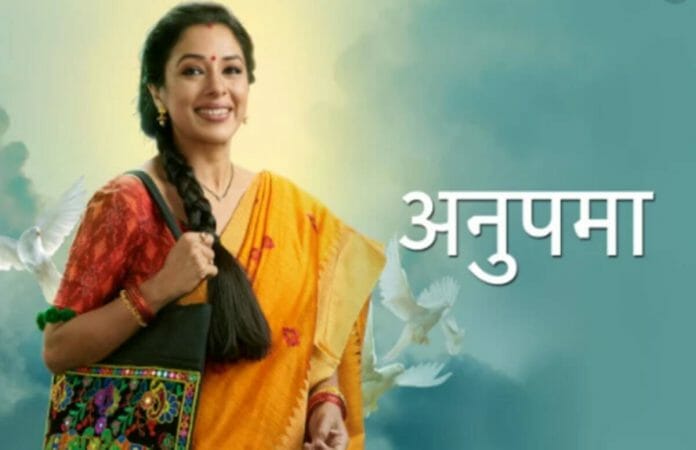 In today’s episode; Kanta asks Anuj, Anupama if they go to the college to study or for romance. Malvika says love birds enemy is here. Kanta stands shocked. Leela says al has become shameless. Kavya asks Leela that it is just a play. Anuj and Anupama performs a skit. He asks Anupama to ask his mother not to separate them. Kavya turns Kanta and takes part in the play. Anuj gets emotional when Kavya as Kanta refuse for Anupama and former wedding. Shah’s stands shocked. Anuj asks Kanta not to separate him from Anupama. Malvika brings Anuj to senses. Anuj says he is still traumatized of the past when he first saw in a bridal attire. He says he wish he could have stopped her wedding 26 years ago.

Anupama apologize to Anuj for kept him waiting. Anuj asks Anupama not to be sorry as she was clueless. Malvika and Devika asks MaAn not to spoil the mood and turn the play into the happy ending. Anuj, Anupama dances together. In the meantime, Hasmuk falls conscious. Anupama, Anuj and other stands shocked. Shah’s worry for Hasmuk. GK stands stunned. Anuj confront GK. GK recalls Hasmuk’s promise. Kavya finds Hasmuk’s tests report. Vanraj takes the report from Kavya’s hand. Anuj recall GK and Hasmuk’s meeting. Vanraj gets irked thinking he don’t understand medical terms and wait for the doctor. Anuj tells to Shah’s that GK knows the truth. GK reveals to Shah’s that Hasmuk is suffering from a serious heart disease. Vanraj gets angry on GK for hiding the truth. Anuj defends GK and says Hasmuk’s promise stopped latter from telling the truth.

Vanraj accuse Anuj and Anupama for Hasmuk’s condition. Anupama says that she was clueless about Hasmuk’s health. Vanraj accuse Anupama. He lose his temper and asks others to enjoy. Leela warns Anupama if anything happen to Hasmuk, she will not spare. Vanraj announce in Anupama and Anuj’ wedding Hasmuk will not take a part. He says MaAn’s wedding will not take place at Shah house anymore. Leela accuse Anupama for Hasmuk’s health condition. Doctor suggest for Hasmuk’s operation. Anupama, Anuj decide to postpone their wedding and get Hasmuk operated first. Anupama vows to save Hasmuk’s life. She cries thinking about Hasmuk. [Episode Ends]