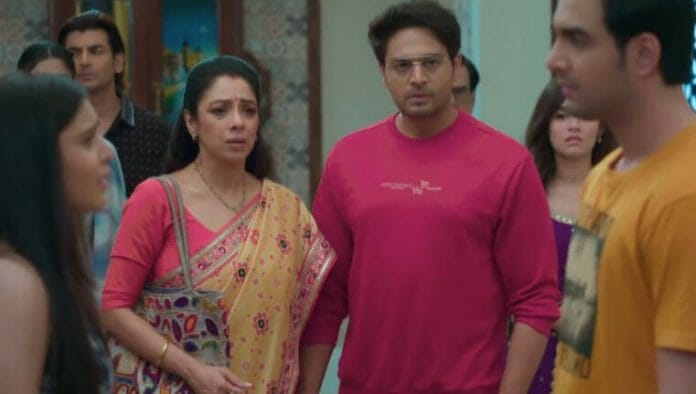 In today’s episode,  Anuj says he is getting late. He finds Anupama conscious. Anuj worries for Anupama. He calls out Dhiraj and Devika. Anuj asks to call doctor. Anupama wakes up and dances to melt Anuj. Devika, Dhiraj and Anupama think Anuj is not melting. Devika asks Anupama not to give up. Anupama dances and continues to stop Anuj from leaving. Anuj manages to escape. Dhiraj and Devika ask Anupama not to give upon and stop Anuj anyhow. Anupama dances in front of Anuj’s car to stop him. Anuj gets adamant to leave. He asks Anupama to stop her dance as he is getting late. Anupama stands teary.

Devika asks Anupama not to spoil her mood. Dhiraj says Anuj will return. Anupama cries thinking she tries the ways but Anuj is very angry thus he ignored her. Anuj returns and confesses his love for Anupama. Anupama gets happy. Anupama, Anuj, Dhiraj and Devika dances with each other. Anuj read poetry for Anupama. They decide to become friends. Anuj, Anupama dance together. Dhiraj and Devika asks Anupama, Anuj not to lose their love. Devika asks Anuj, Anupama not to get upset so much that they are left alone like her. Dhiraj adds and regret like him later. Anupama, Anuj stands stunned. Dhiraj asks not to do any emotional drama. He asks to dance. Anuj refuse to dance on Dhiraj’s favourite song. Dhiraj gets adamant to play his favourite song. Anupama asks Anuj why he is stopping Dhiraj from playing his favourite song. Anuj says Dhiraj’s song is crazy. Devika and Anupama say they want to listen the song.

Anuj, Anupama, Dhiraj and Devika dance together. Vanraj asks Hasmuk how he got sprain. Paritosh talks with his friend. He says deal is done and he is going to become rich man soon. Paritosh says to his friend to book an expensive car for him. Vanraj tries to talk with Paritosh. Paritosh ignores Vanraj. Jayanti looks for Paritosh. Vanraj calls Paritosh. Paritosh learns Jayanti came to meet him. He gets excited to get his commission. Vanraj worries for Paritosh.

Precap: Vanraj struggles to arrange the money. Jayanti threatens Shahs. Vanraj decide to take the control in his hand again.