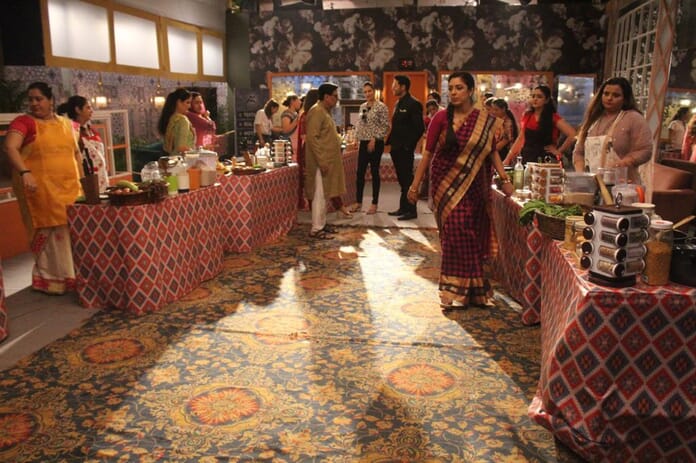 Today’s episode starts with Anupama asking Nandini not to worry. She advise her to wait in the café and they will go back home together. Anupama think she wanted to reveal to Vanraj about Rohan but he got big order from MLA thus she didn’t got a chance to tell him.

Anupama gets surprised by GK and Anuj. Gk tries to entertain Anupama by turning the storeroom into a palace. He address Anupama as queen and Anuj king playfully. Anuj ask GK to let Anupama go and work. GK engage Anupama. Anupama play along. Ahead, Anuj get smitten seeing Anupama. He further recall Anupamas family picture and gets restless. There, Leela gets a messages from her friend. They get angry on Anupama for conducting cooking competition. They also inquire about Anuj. Leela think today ladies are inquiring about Anuj but she worry they will raise question once they will learn that Anupama and Anuj are friends.

Devika asks Anuj why did he let Anupama go? Anuj reply because Anupama has a family too. Devika says Vanraj and Kavya will never change and will trouble Anupama surely. Anuj says if Kavya or Vanraj will do anything this time then he will not spare them. He further feel he is cheating Anupama. Devika tries to make Anuj understand that he is one side-lover and it is okay. She advise Anuj to keep Anupama happy.

Anupama return home. Leela says to Anupama that her right place is with family. Anupama says to Leela that she has given place in the house but when she will give her place in her heart. Leela leave. Anupama talk with Nandini and decide to reveal to Vanraj about Rohan. Samar come and refuse to reveal to Vanraj. Anupama says they are doing wrong by hiding the truth to Vanraj. Samar argue with Anupama about Vanraj. Later, Anupama asks Samar to trust Vanraj as he is his father. [Episode Ends]

Precap: Anupama gives an inspiring speech to the ladies who reported for the cooking competition. Devika, Kinja, Anupama and Anuj dance together. Something stun Anupama and she stops dancing.