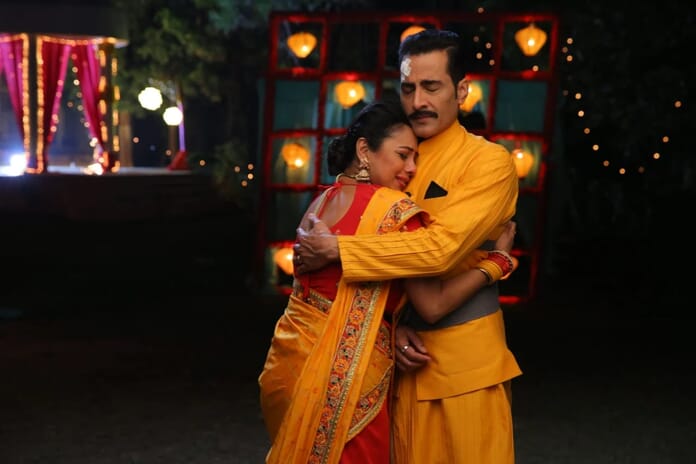 Today’s episode starts with Kavya calling Vanraj. She worries why Vanraj is not receiving her call. There, Leela says to Anupama since she is going to fly the kite after ages than she should to take an expert advice. Anupama asks from whom. Leela says she can take from her. She adds flying kite sometimes make the thread to lose the grip. Leela says to Anupama if that happens not to let go thread but tight it. She says sometimes kites go to neighbour but that doesn’t mean kite belongs to them. Anupama and Vanraj both get what Leela is trying to make them understand. Hasmuk intervene and asks Leela not to always give advice to Anupama. Leela replies to Hasmuk, why he always wants her to scold Vanraj. Anupama asks all to go as she will bring stuffs and join them later.

Later, Shah’s leave the house. Kavya see Vanraj happy with his family and stands jealous. Anupama come last and looks at Kavya. She recall the past. Kavya thinks Vanraj is not with her for this festival too. She says no problem and now she will go to him. Ahead, Samar goes to Nandini’s house. Nandini come wearing half cloth and both gets embarrassed. Nandini asks Samar to pass her cloth as she will come back getting ready. Samar asks Nandini to take her time. In the meantime, Samar reads a dairy of Nandini and gets teary. Nandini come and Samar stands teary. Samar hugs Nandini. Nandini asks Samar what happened. Samar makes an excuse. Other side, Kavya writes a message on kite and says this message not only will reach to Vanrah but to Shah’s.

Here, Anupama recalls her childhood and prepare her kite. She makes a smiley on kites. Vanraj and Shah’s watch Anupama from far. Anupama prepares her kite. Paritosh says to Anupama she seems expert in flying kite. Anupama gets happy getting the compliment. Ahead, Kavya come and gives her kite to few kids out there. In the meantime, Shah’s dance on ‘patang’ song. Vanraj gets smitten seeing Anupama flying kite. Kavya stands far and looks at Sah’s enjoying. Further, Shah’s do kite flying competition with each other. Samar, Partiosh, Leela, Sanjay’s kite falls. Bailu makes fun of Samar and asks he claimed he will win the competition. Anupama asks Samar to try once again. She adds once he got failed that doesn’t mean he should not try again. Anupama asks Samar to be careful not to make same mistake second time. Vanraj and Kavya hear Anupama. Later, Nandini, Samar, Partiosh and Kinjal get romantic with each other on ‘Aankho Ki Ghusthakiyan’ song. Here, seeing Anupama flying kite, Vanraj gets happy. (Episode Ends)

Precap: Vanraj gets confused over his feelings for Anupama.