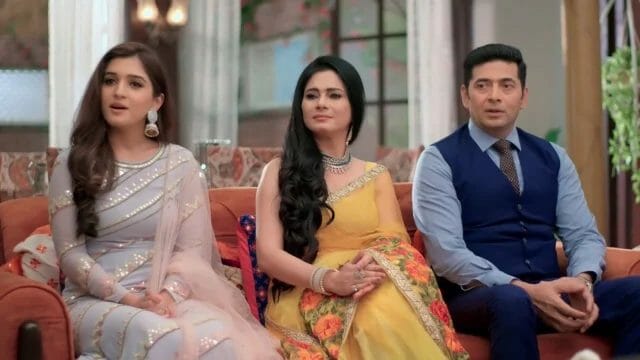 Vanraj asks the reason for becoming foster parents at middle age. Anu asks Anupama and Anuj if she can enter the house. Anupama make Anu meet Hasmuk. Hasmuk feels glad that Anupama and Anuj fostered a child. Anu asks Shahs to talk something that she can understand.

Anupama introduces Anu to Samar, Pakhi, Kinjal and Paritosh. Leela asks Anupama to not involve her in their matter. Paritosh refuse to meet Anu. Kavya introduces herself to Anu. She hugs her. Anu asks Anupama if she can sit on the swing. Anupama allows Anu. Anu by mistake pushes Kinjal. Anupama and others worry for Kinjal.

Leela gets angry on Anu for pushing Kinjal. Anupama tells to Anu that Kinjal is carrying a baby and they should be extra careful towards her. Anu apologizes to Kinjal. She assures Kinjal that she will take care of Kinjal’s baby once she will be out. Kinjal says it can be boy too. Anu says she will pray to God to send a girl only.

Anu asks Anupama if she can see the house. She says house is good and they will come to the place. Kinjal, Pakhi and Samar shows house to Anu. Kinjal and Anu bonds well. Ankush tell to Barkha and Adhik that Mallvika has transferred everything to Anuj. Barkha asks Ankush to do something before it gets late. Adhik interrupts and says if Ankush will not do anything than he will not sit quiet.

Pakhi talk with Samar and says Anu is cute but they share good age gap. Paritosh asks Samar and Pakhi if they aren’t sad that Anupama hide news about Anu. Leela and Vanraj accuse Anupama and Anuj for fostering a child. Anupama asks Vanraj to stop interfering in her matter. [Episode Ends]

Precap: Paritosh, Samar and Pakhi complaints to Anupama about fostering Anu. Vanraj share with Leela that Anuj is a smart business man as he fostered a child so that his children don’t get share in his property. He adds his children are not a beggar.