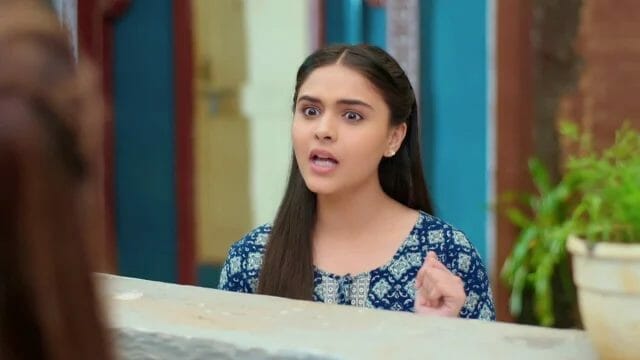 In today’s episode, Adhik looks for Pakhi. Anuj tell to Adhik that Pakhi is with Anupama to fix her dress. Adhik wait for Pakhi. Pakhi request Anupama not to take a step against her. Anupama decide to teach a lesson to Pakhi. She ignores Pakhi’s request. Shahs and Kapdias enjoy the sangeet. Pakhi asks Anupama to not spoil the celebration. Anuj sees Anupama. Anupama halts the function. Shahs and Kapdias stand shocked. Vanraj asks Anupama what she is up to.

Anuj asks the guests to leave as they have to discuss a family matter. Pakhi tells to Vanraj that Anupama wants. Anupama continues she wants to cancel Pakhi’s wedding. Pakhi hugs Vanraj. Vanraj asks Anupama what is the issue. Anupama says from where she starts. She counts Pakhi’s mistake. Anupama discloses Pakhi ordered jewellery that costs 60 Lakhs. Barkha smirk seeing the drama. Adhik looks at Barkha. Shahs and Kapadias stand stunned. Vanraj gets shocked hearing the price. Anupama asks Vanraj he consider Pakhi as her princess but she consider her queen. She further apologize Anuj on Pakhi’s behalf. Anuj asks Anupama to not apologize on Pakhi’s behalf.

Anupama gets adamant to teach a lesson of Pakhi. She asks Pakhi why she is silent rather she should shout on her. Pakhi stand teary. Anupama says Pakhi claim she is jealous of her. She asks Pakhi what she achieved in her life that others will get jealous of her. Anupama find Vanraj right for disowning Pakhi. She says until Pakhi will keep getting a support, she will not learn from her mistake. Anupama says parents are always wrong by supporting their children wrong deed.

Anupama add Parents are always criticized when a child does any mistake. She says she gave good upbringing to Pakhi, Samar and Paritosh but she failed as a mother. Kavya says Paritosh realized her mistake but Pakhi never do that. Devika says Pakhi should have value whatever she has blessed with.

Precap: Vanraj request Anupama to not throw Pakhi out from the house. Anupama says to Vanraj that he can take her along. She further asks if anyone apart from Vanraj wants can take Pakhi along. Dolly, Devika and Kinjal refuses. Anupama asks Pakhi to leave the house.