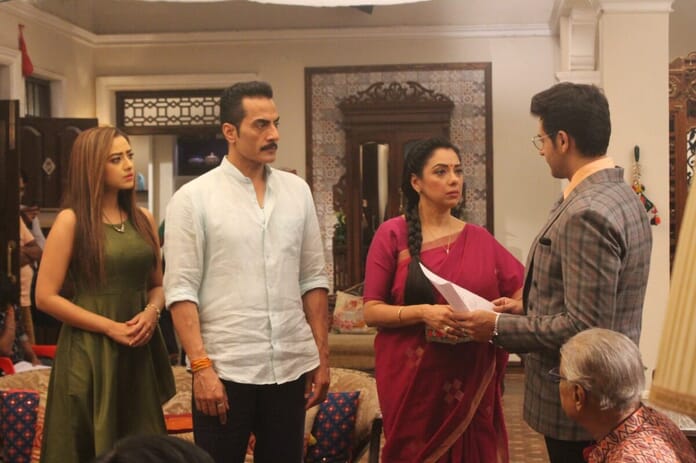 Today’s episode starts with Hasmuk saying Leela. Leela says to Hasmuk that she is just asking question. Partiosh side Leela. Samar asks Paritosh to calm. Partiosh asks Samar not to speak as because of him Anuj get a chance to enter the house. Anupama question when from past 9 years Kavya used to come and go than none had any problem with Vanraj and Kavyas relationship. She add she herself used to pack tiffin for Kavya. Vanraj says he knows such kind of friendship thus want her to stay away from Anuj. Shahs argue with each other. Kinjal, Samar and Hasmuk side Anupama. While, Leela, Paritosh, Kavya and Vanraj humiliate Anupama. Vanraj asks Anupama to refuse Anuj’s offer. Anupama says to Vanraj that he is not her husband anymore to order her. Leela says Vanraj can’t order but being a mother she can. She asks Anupama to reject the offer. Anupama stands shocked.

Vanraj gets furious and says to Kavya that Anuj pre planned to make Anupama his partner. Kavya asks Vanraj what problem he has if Anuj is offering Anupama. Vanraj says he don’t know all these but Anupama can’t work with Anuj. Kavya says Anupama will not listen to him. Vanraj says but she has to listen Leela and Paritosh. He smirks. Kavya asks Vanraj why he is so affected. Vanraj says he doesn’t want Anupama to work as a partner in Anuj’s office where she will work as an employee.

Kinjal, Samar and Hasmuk talk with each other. Kinjal and Samar says Anuj seen Anupama’s potential within three days but her own family member is raising doubt on her. Samar asks Hasmuk to talk with Anupama. Hasmuk says some talk are shared only with friends.

Ahead, Devika encourages Anupama to take a stand for herself. Anupama gets furious. Devika asks Anupama to start loving herself. Anupama says Shahs gave her love. Devika says thus Hasmuk send her to make her understand. Here, Partiosh says to Vanraj he will talk with Anupama and will ask her to reject Anuj offer. He says he can’t bear Anuj around Anupama.