Episode begins with Kavya pleads Priest to wait for some more time saying groom will be on his way. Priest says auspicious time of marriage passed already and he has to go for another marriage too and leaves from there. She gets Vanraj’s voice message that says it’s impossible for him to leave the house today so tomorrow he will do whatever she wants him to do and tells her to not do any mistake in anger.

She was about to faint but Anirudh holds her before she falls, she shocks seeing him there and faints which makes him worried for her. Shah family brings Vanraj and Anupamaa to the stage. Rakhi thinks both Nandini and Kavya missing. Leela says let’s start the rituals if Anupamaa and Vanraj stared each other enough then.

Kavya regains consciousness and says she knows that Nandini would have informed him about her but she can handle herself. He says her path is wrong and how can she forget that she is still his wife legally and Vanraj is Anupamaa’s husband then what’s the use of this marriage drama. He says she made joke of marriage and Vanraj made joke of her and taunts her saying she is dumb and everyone will just laugh at her. He asks how can she even think that Vanraj will marry her, leaving his family and says he won’t marry her. She tells him to stay silent.

He says Vanraj again marrying his wife and didn’t came to marry Kavya first time also, this is proves everything and his family only matters for him and she is just a toy for him nothing else and he won’t leave his family for her. Nandini reaches Samar’s house and gets relived seeing Vanraj there. Rakhi asks Nandini about Kavya. Leela says Kavya is not even a bride that she is taking this much time to get ready. Vanraj thinks Kavya didn’t replied him for his message.

Anirudh says if Anupamaa and Vanraj can start new beginning then he and Kavya can start their life too again. He says they have lot of problems between them but they shares a relationship too so let’s give a chance to that relationship. He says he is not best husband in the world but he won’t treat her the way Vanraj treats him and won’t disrespect her like Vanraj did today. He tells her to forget Vanraj saying they both did mistakes but now they got chance to rectify that and asks will she marry him again.

Samar and Paritosh brings the marriage garlands. Anupamaa gets surprised seeing the pictures on the garlands. Samar says its Jayesh’s idea. Jayesh blesses the couple. Leela blesses them in English saying she prepared especially for them. Anupamaa gets happy and says she would have done something good in her previous birth to deserves this family.

Leela says Sanjay did good by stopping Vanraj from going to office. Anupamaa, Vanraj exchanges the garlands. He hopes Kavya won’t come here. Kavya says today Vanraj has to decide with whom he wants to live that too in front of everyone. Anupamaa says she is lucky to get Vanraj. Vanraj thanks her for tolerating him for in these 25 years. Kavya leaves for Shah house. Anirudh tries to inform that to Nandini. 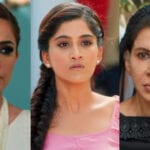