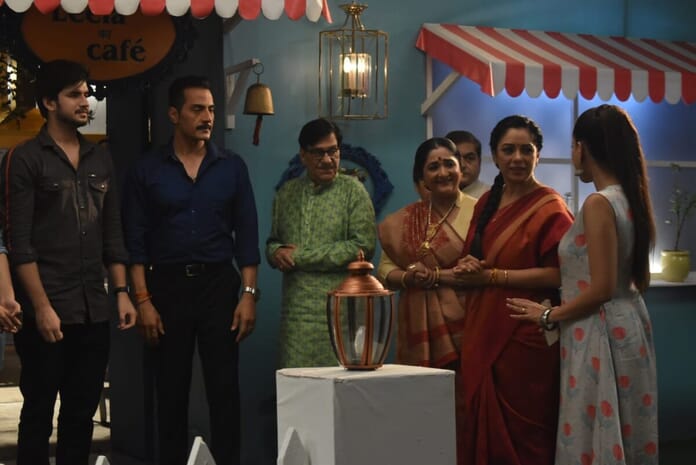 Ahead, Rakhi provoke Paritosh by saying with Vanraj’s café it is strain on his image that his father run a café. Partiosh is instigated. Vanraj light lamp at the café. He thanks Anupama. Bhavesh and Kanta goes to Vanraj and give him homemade pickle. Vanraj apologize Kanta for hurting Anupama in the past. Kanta says she doesn’t have a big heart like Anupama to excuse him. But she doesn’t have a hatred for him.

Leela and Hasmuk talks with each other. They think the dream they have ever dreamt because of Anupama they are going to live. Leela and Hasumk both praise Anupama. Rakhi goes Kavya and taunts her over café. She also alert her and asks her to join the café else Anupama and Vanraj will work together and history might repeat. Rakhi says to Kavya that she should start cleaning utensils at the café. Kavya asks Rakhi to cut the crap and check out Kinjal first. Rakhi sees Kinjal wiping utensils and thinks latter has gone made.

Anupama goes to Pakhi and asks about café and academy. Pakhi behaves rudely with Anupama. Anupama feels bad and think it is big day for her but Pakhi is upset. Samar and Nandini see Anupama upset and decides to talk with Pakhi. Both goes to Pakhi and tries to make her understand not to get influenced by Kavya. Kavya over hears the talk and goes mad at Samar and Nandini for instigating Pakhi against her. Shah’s gather to calm Kavya. Vanraj asks Kavya to go home instead of creating scene. Kavya cries and says everyone only blames her. A customer come and leave the place seeing the fight. Leela and Hasmuk accuse Kavya post customer leaves the café empty-handed. Anupama becomes the first customer and drink tea at the café.

Vanraj and Shah’s gets impressed by Anupama. Rakhi asks Kavya to learn things from Anupama. Kavya gets irked. Later, Shah’s wait for the customers. Kavya taunts it is not easy to run a business. [Episode Ends]

Precap: Anupama asks Shah’s to spread over the table. Vanraj says it is a strategy to attract customers. Kavya challenge and says yet none will come to the place. Anupama and Vanraj gets upset.