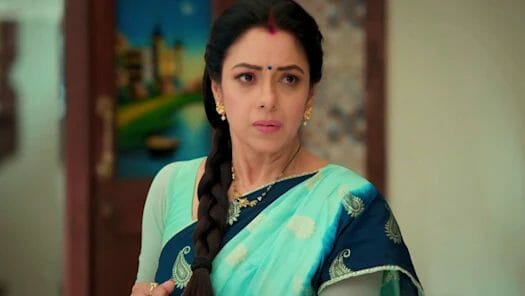 In today’s episode, Anuj says to Anupama that Shahs didn’t react much. Anupama says Samar and Pakhi understood but Paritosh will take a time. Anuj says that Paritosh is upset and he has a reason. Anupama says even Kinjal might be worrying as when she was pregnant, she too wanted Baa to be around. Anuj assures Anupama that he will support her in raising Anu so that she can look after her other responsibilities too. Anupama and Anuj divide their duties. Anuj sees painting made by Anu. Anupama and Anuj say Anu wants the family to be together.

Adhik asked Pakhi if she wasn’t shocked learning about Anu. He says it wasn’t needed. Pakhi listen to Adhik. Adhik shares with Pakhi that he told Barkha that he likes her. Pakhi asked Barkha’s reaction. Adhik says he will meet her soon. Vanraj says to Pakhi that he doesn’t like Adhik and she should stay away from him. Pakhi says if Anupama and Anuj can do whatever they want then why can’t she?

Anuj and Anupama reach home. Anupama asks Anuj to pick Anu and lay her on bed as she is sleeping. Anuj asks Anupama to stay back in the car as Anu might get disturbed. He add he never hold a sleeping baby before. Anupama takes Anu. Anuj says only she can handle Anu.

Kavya talk with Vanraj and says they should adopt a baby too. Vanraj sit shocked. Anuj and Anupama put Anu to the sleep. They both confess that they need each other. Anu gets scared while sleeping. Anupama asks Anuj not to worry as kids gets sacred in sleep sometimes. Anuj says he can understand as orphans always fear if whatever they are blessed will get snatched later.

Precap: Anupama decide to get Anu’s admission done in Pakhi’s school. Pakhi objects. She asks Anupama to choose amid Anu and her.