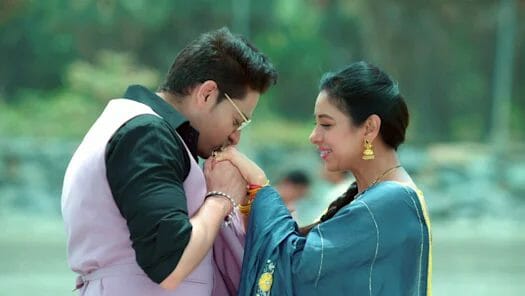 In today’s episode, Vanraj asks Anuj to take Anu and Anupama and leave the place. Anuj make Shahs recall how he saved their house and Anupama took stand when Leela threw Hasmuk out from the house. Vanraj asks Anuj to stop his lecture and leave. Anuj says before completing his talk he isn’t going anywhere. He feels pity as Paritosh is shameless by leaving the house and staying in the penthouse gifted by Rakhi. He says Paritosh wanted to abort his child and gets angry. Anuj highlights even Pakhi is immature and can’t expect maturity from her.

Vanraj gets angry on Anuj for speaking against his children. Anuj says he too can’t tolerate Anupama and Anu’s insult. Both fight with each other. Anupama asks Vanraj and Anuj to stop the fight. Leela says to Anupama she feared the same and asks latter to leave. Pakhi and Paritosh say Anupama does whatever she wants. They say Anupama will not leave the house instead. Kinjal and Kavya request Anupama to not break tie with them because of other Shah member. Kavya says a mother is not valued until she goes far and alerts Pakhi. Anupama decide to never come back to Shah house.

Anuj holds Anupama’s hand and asks her to accompany him. Anupama says she wants 2 minute before leaving the house. Anuj says to Anupama that he will wait for her. He thinks he will never make up with Shah’s. He recalls Anupama’s insult by Shah’s and gets furious. Vanraj asks Anupama to leave. Anupama says she wants to talk with Shah’s ladies before leaving. Vanraj allows Anupama.

Anu asks Hasmuk to tell her a story. Hasmuk tells a story to Anu. Anupama says to Pakhi that she hurt her a lot but she will never be able to hate her. She adds she doesn’t want fight at Shah house but she is not able to understand how to break mother-daughter bond. Anupama apologize to Pakhi for being her mother. She apologizes to Leela for Anuj’s behaviour. Anupama wishes she never show up to Shah.

Rakhi assure Anupama that in her absence she will take care of Kinjal. Kinjal request Anupama to not leave. Anupama console Kinjal. She says a mother leave the house only when she breaks. Anupama asks Kinjal to not cry. She prays to God Kinjal should not see a days like her post becoming a mother. Kinjal, Rakhi, Kavya and Anupama get emotional. [Episode Ends]

Precap: Hasmuk asks Anuj if Anupama will not come to meet him too. Anuj says he is always absent when Anupama is insulted. Anupama says she is leaving the house but who knows God will bring her back again.